This tour had one big hero - Roger Taylor. Not only he seemed to be happy to meet the fans and give autographs (what a difference compared to the 2005 tour!) but he was also in TOP form, drumming like a GOD!

The setlist was changing A LOT at the early gigs which was great, we got some very nice surprises (for example Time To Shine or The Stealer) but in the end it became boring and predictive as always. But we have forgiven them - after all, we were entertained for 140 minutes in average! The biggest mistake of this tour was the intro. Surf's Up... School's Out which has become the favourite track of most fans, was used as the intro track at 10 gigs and it worked great. It's a great pity Brian didn't like it and the band decided for Hammer To Fall instead.

So let's get to the tracks themselves. Surf's Up was almost always played as the intro (until the scream) - and was followed either by a shortened version of the same song or by also shortened version of Hammer To Fall. Fat Bottomed Girls had a short White Man intro. I Want It All was played as the single version (without the instrumental middle part). Surf's Up was later moved before Seagull and got longer and longer... by the end of the tour the whole song was played. '39 became as a duet of Brian (guitar + vocals) and Roger (bass drum + tambourine) but Brian always stopped and invited the rest of the band (minus Paul) for a full version of the song. The bass solo was performed by Roger who was playing bass with his drumstick. A great drum solo followed while Nigel (the drum technicial) was building the kit around Roger on the B-stage. I'm In Love With My Car followed and in Zurich Roger surprised us with a brilliant version of A Kind Of Magic (which was a boring song when sung by Paul but became really popular with Roger on vocals and drums). Say It's Not True followed - Roger in the first verse, Brian in the second verse and finally Paul in the finale.

Now the concert was in its second half and it was time for big hits. First something from Paul's career - mostly Bad Company and Feel Like Makin' Love which was however later replaced by We Believe. From time to time we got some surprises, for example Time To Shine or Shootin' Star but only scarcely. The guitar solo often included some interesting bits, depending on the country, and always was followed by Bijou with Freddie's studio vocals and live guitar. Now we all knew what to expect when the end of the gig was approaching. Radio Ga Ga (Paul kept forgetting the words so in the end the song had to be shortened!), Crazy Little Thing Called Love (which had a great guitar solo by Jamie at some gigs but apparently Jamie himself decided he didn't want to be in the spotlight and the song was shortened), Show Must Go On and BoRhap (once again with Paul and Freddie sharing the vocals; this time they used the live track from Montreal 1981).

Encore - an incredibly rockin' Cosmos Rockin' :-) The final line was always changed in respect to the city where the band played, for example "We got Rotterdam rockin'". And then the usual ending... All Right Now (a much shorter version compared to 2005), WWRY and WATC. Then the band saying goodbye and Roger throwing his drumsticks to the audience... 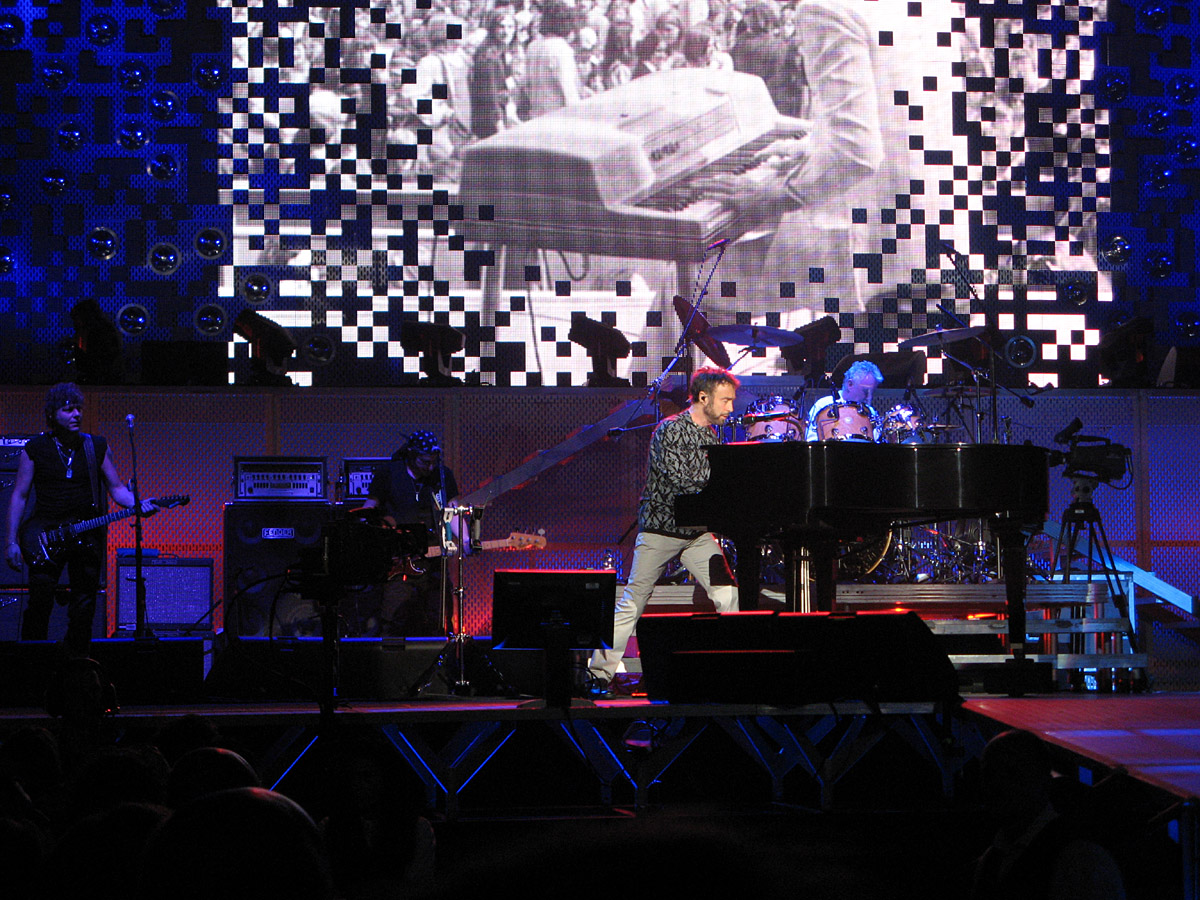