I didn't know how I should call these four concerts which included songs from the not-yet-released A Day At The Races album but they can't be considered part of the A Day At The Races tour: it was before the release of the album and also the setlist was more similar to the ANATO tour. Tracks marked with (*) were NOT played during the famous Hyde Park gig (18.9.1976) due to lack of time reserved for the concert. Queen were given 60 minutes for the free Hyde Park concert so after 80 minutes they really have to end without the usual encores. The concert was recorded on video but even the master tape is not of perfect quality so it's unlikely it will ever be released.

An interesting bit about the Hyde Park gig (thanks to Jane Palm-Gold): "The white boiler suit Fred wore coming onstage was especially chosen by him so that he could be seen from miles away (because white stands out at a distance) and even better (and this is great but you have to know this place really - a London landmark for many years) it was acquired at Lawrence Corner at Euston (!), a tatty second hand clothes /hire place where a lot of clothes /outfits were hired from for band promo shoots - for instance they had a lot of military stuff there." 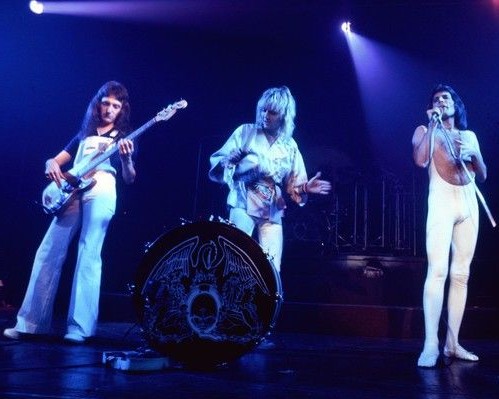