The Dark is played from the tape and Brian launches the show with Back To The Light, the title track of his album. After Driven By You he greets the fans, comes closer to the edge of the stage and a rockin' version of TYMD follows. Love Token begins with a short Jamie's solo, then comes the heavy part. In the end of this song the girls (Shelley and Cathy) start "arguing" with Brian: "he cheated on me... son of a bitch, motherfucker..." and Brian usually replies "I'm sorry, I didn't know what I was doing, I was rushing Headlong..." Acoustic part consists of Love Of My Life (this song never misses in the setlist), the a-capella intro of '39 and Let Your Heart Rule Your Head. After a couple of heavier tracks it's time for Brian's guitar solo (brilliant as always). Cozy is certainly not left behind and during his drum solo he drums along with the famous 1812 Overture (many lighting effects - worth seeing). As a grand finale, the rock part of Bohemian Rhapsody is played and it fluently changes into a "reprise" of Resurrection. It's time for band introduction (especially the ladies are cool :-) It wouldn't be a good concert without We Will Rock You, this time performed as the famous slow/fast version. Quite a long version of Hammer To Fall usually closes the concert.

Brian's concert in Brixton Academy was filmed and later released on CD and video. It's a brilliant recording although some parts are cut. Dream Is Over had to be omitted because Yoko Ono never bothered with replying to Brian's letter about releasing this John Lennon's song. There were some troubles with guitars before Last Horizon and Spike had to play a keyboards solo before they fixed the problem :-) The CD released also misses part of Love Token, Hammer To Fall and We Will Rock You if I remember well. Buy the video if you can!

Note: after 7th November 1993 Driven By You was dropped from the setlist because (according to Brian's words) it was a difficult song and Brian had some serious troubles with his voice. Otherwise the setlist didn't change much BUT Brian very often came with a surprise or two! The most memorable concert was the final one in Oporto. Cathy Porter apparently sang the We Are The Champions intro (a-capella), Hammer To fall was played by Brian, Jamie and Spike with the Guild guitar and a half dozen more Guild guitars played by the techs on stage, miming Brian! The band also did a loooong version of Love Token and somewhen during the middle section Cathy and Shelley approached Brian singing "Merry Christmas" and dropped a lot of "sparkling confetti" over his hair. Brian seemed to be quite emotional. 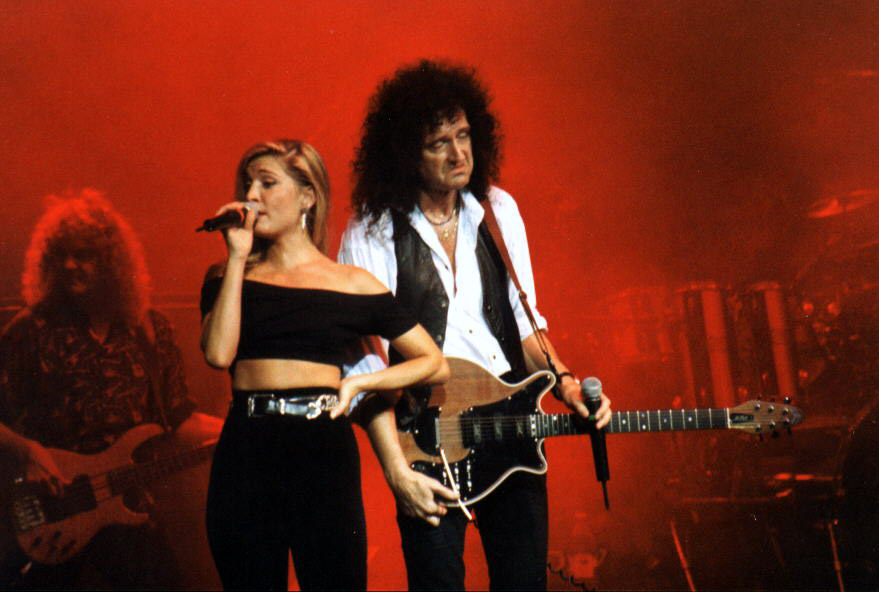