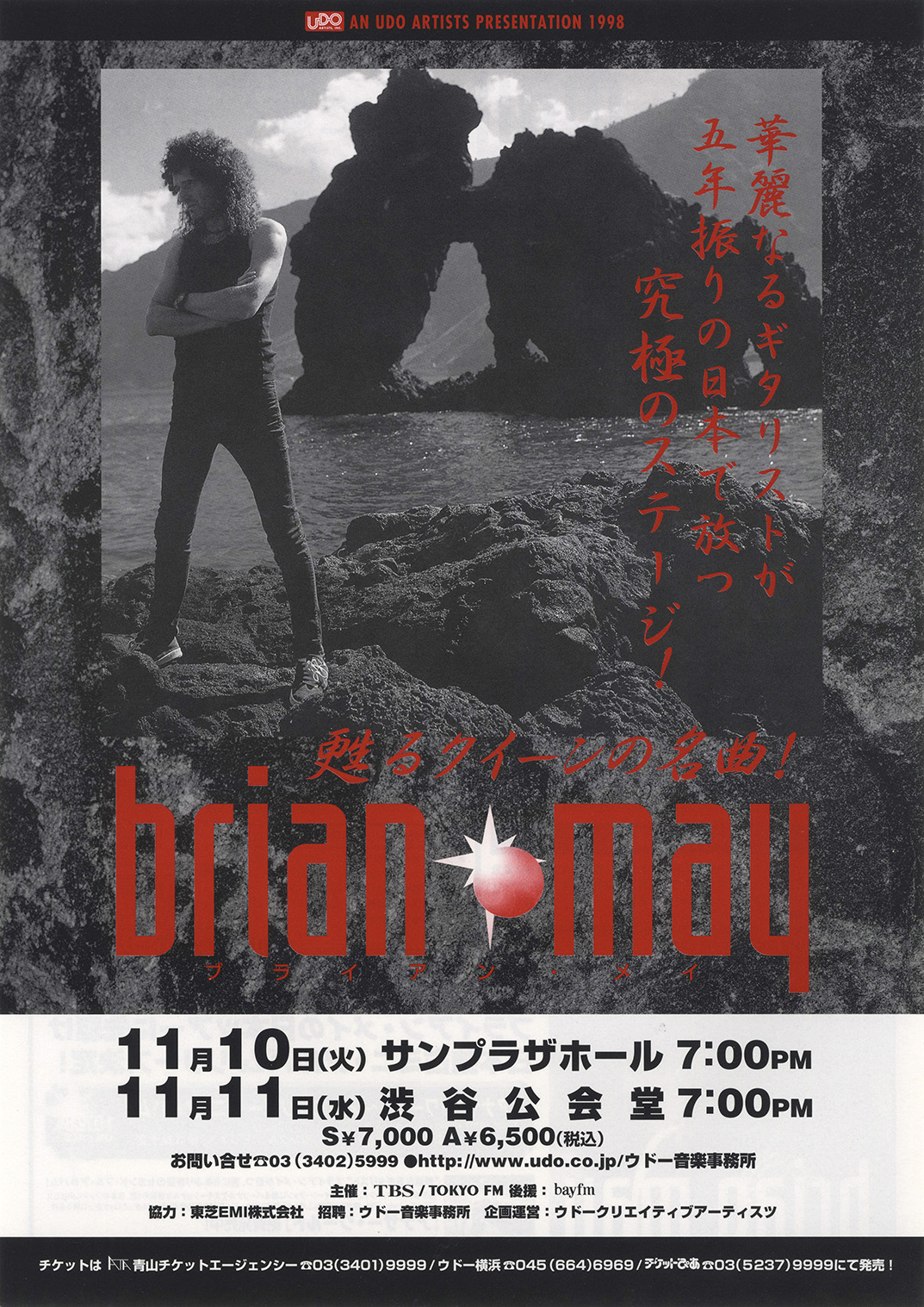 'IMP Hall' in Osaka has a capacity of 1,200 people and all standing. (I felt this hall looks like Petofi Hall where Brian played in Budapest.)

The show delayed about 30min, because he was very busy in day-time. He arrived the hall at 18:30! Before the concert was starting, I met the guy at the hotel where I stayed in Osaka. I knew he was a QUEEN fan, because he put on QUEEN's t-shirt. He said to me that he came to Japan from Australia/Melbourne for Brian's concert! That's great! (I'll be happy, if I could to hear from him again :-) Please!)

Anyway the show started at 19:00. There was no support band.

Tonight show was the last concert for me. At 19:00 the lights went out and the curtain which has the paint of the tree from the cover for 'Another Wold' album came down. Then Dance With The Devil was played on tape.

After we were told about T.Conway by japanese language, the show started with Brian dressed as the Twitty Conway and he began to singing the song called It's Only Make Believe. Also tonight, almost of the audience didn't know he was Brian himself. After the song Twitty said to us 'Konbanwa' by japanese.

After the song C'mon Babe, Brian who suddenly appeared to the right of the stage. (He didn't use the stairs like the european concerts.) He sang the song Space with his guitar. The song was over, and he said us 'Konnichiwa ! Konnichiwa Osaka !' by japanese ! The QUEEN Medley was great. The audience became to too hot. In acoustic set, Brian said 'Anatagatawa totemo yasashiidesu', before he played Love Of My Life. He also said 'Korewa Freddie no utadesu' by japanese. Please try to translate into english !

He played 39/On My Way Up started with short acoustic guitar solo by brian. I like this song On May Way Up very much. Tonight's Brighton Rock was different from his normal guitar solo. He played this song start with the middile part of Get Down Make Love.

The first encore was Another World and All The Way From Memphis. Brian introduced the song Another World for 'Betsu sekai' by japanese. The 2nd encore was Teo Toriatte. Brian said 'This is the last night in Japan, I'm afraid. We feel little sad. But I think I wish come back very soon, okey ?'. We all sang 'Teo Toriatte Konomama Ikou Aisuruhitoyo...'.

The show ended and Brian said 'Doumo Arigatou Gozaimashita. Mata Aimashou.', then Why Don't We Try Again played on tape...

I thought the all 4 shows in Japan were wonderful concerts, and I was satisfied with them. Doumo Arigatou, Brian ! Also thanks Spike, Neil, Jamie, Susie, Zoe and Eric! You were the good company, I think.

Finally, tomorrow I have to go back to Tokyo, my home :-(

PS. BTY, on Nov 15th, they went to Australia by airplane from Narita air-port in Tokyo. After they take some holidays, their show must go on!