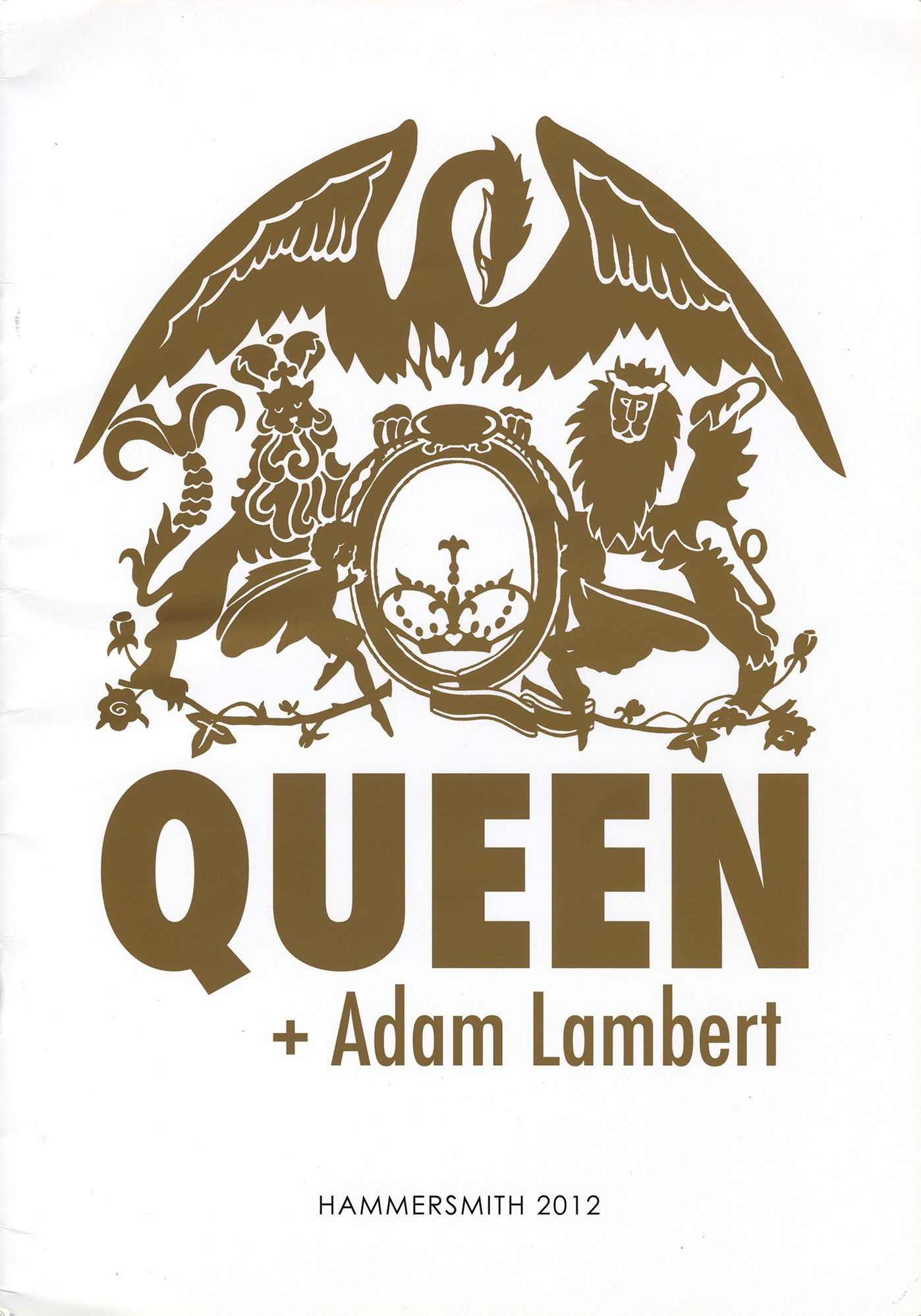 I found out that Queen would be touring with Adam Lambert through the Queen fan club and begged my mum to let me go as a treat for passing my A-Levels. We live in Hull, so making the trek down to Hammersmith for the four of us was going to be very expensive but after lots of nagging, she finally agreed to take us. However, our journey seemed to be doomed from the start. We missed out on tickets for the first 2 dates so obviously we were very disappointed, but then Queen added another date which we were able to get tickets for. I had been told to try and get into the last night of the tour because the last night was always a bit more relaxed as the band let their hair down more and everyone had a great time. Unfortunately we wouldn't all be sitting together and our seats weren't very good (seated near the back, Row P) but no matter, we were going to see Queen live! When the tickets arrived I slept with them under my pillow for 2 months.

On the day of the concert we woke up really early and drove to the train station. We had to catch 2 trains to take us to Kings Cross in London and the first train was supposed to be taking us to Doncaster to change over. We had been travelling for about 20 mins before we realised that we were on the wrong train! We ended up in York and my mum quickly dashed us over to the help desk to find out when the next train to London was departing. Because we had booked the train in advance but had now missed it we would have to pay &#163;200 for new tickets for the next train. We then started to look for a train to take us back home because we couldn't afford to do that, however the train guard from the London train had heard our predicament and told us that he would let us on for free, just keep quiet about it!'

We finally arrived in London around an hour later than planned but we were finally here!

After a day of exploring Hammersmith and doing the usual touristy things, we decided to go for some pre-show drinks at a local pub near to the venue. The pub turned out to be full of other fans who had also had the same idea, judging by the amount of Queen T-shirts I saw. I met some really cool people there and after a while we decided it was time to leave for the venue. We queued up outside and after buying our merchandise the steward directed us to our seats, however we had arrived there about an hour early so the theatre was practically empty as everyone else was obviously in the bar. We would be sitting separately for the concert but decided to sit together whilst we were waiting and then move when more people started to come in. As the clock ticked down and my excitement was mounting, my dad noticed that there was a whole section of seats overlooking the balcony near the front that was not filled. So dad had the sneaky idea of moving down to those seats to see if we could sit in them and if anyone came and told us to move, we would just go back to our original seats. As the show was about to start the section started to slowly fill up with people and we prayed that nobody would come and move us. It was the longest hour of my life as every time a steward walked past we sank lower down into our seats not wanting to draw attention to ourselves and the fact that we were not sitting in the right section. The show was supposed to start at 8pm, and as 8pm came and went there were still 3 rows of seats completely empty, apart from us, which we thought was very strange as we knew that the show had sold out and my dad said that there was no way a whole 3 rows worth of people would come charging up the stairs once the show had started. From behind the curtain we could hear sounds of a guitar being tuned and drum beats and the crowd went wild. Then just as the show was about to start, a group of women came to sit down in the empty seats on our row and we thought we'd be moved on, but they luckily they all passed us. One woman was wearing a bright pink sequinned top and bore a striking resemblance to Anita Dobson (Brian May's wife), she smiled at us and said 'hi!'. As the party continued to file past we noticed that they were all wearing VIP guest passes. We has inadvertently crashed the VIP section and were sat next to Anita Dobson, Brian's son Jimmy and his family, one of Brian's daughters (I think it was Louisa), Roger Taylor's wife Sarina, his daughter Tiger-Lily, Nancy Dell'Olio, and two gentlemen whom I was convinced were Mike Moran and Peter Hince although I couldn't get a good enough look at them as they were sat in front. There were also a few other people I didn't recognise so I assume they were part of Adam Lambert's entourage. We just couldn't believe it! The stewards immediately came round and started checking some people's passes in the section and we were terrified that we were going to be found out and moved on, but by some miracle they didn't notice us so we stayed where we were, I mean we certainly weren't going to move unless we were forced!

Anita didn't sit down throughout the whole show and danced with everyone, including us! I was trying not to stare over at them too much because I figured they probably wanted to be private and by the way they came in, they were obviously trying to draw as least attention as possible. My dad was filming the show and tried to discreetly pan the camera around to film where we were sat as we knew no one would believe us without video evidence, but as soon as he focused on Anita, she jumped up in front of the camera and waved energetically. They were all very candid. When Brian played Last Horizon she watched avidly perched on the back of her seat (she never sat down properly) with pure love in her eyes, which sounds so mushy but it was true!

As for the show itself, Queen opened with Keep Yourself Alive. During either this song or the next one, I can't remember which, Brian had a camera attached to the Red Special, sort of pointing down the neck so it was filming his fingers on the fret board which was played on the back screen. He kept titling his guitar as he was playing to try and film the audience. During Under Pressure he also brought out a double-necked Red Special (Didn't get any photos of this but there are loads on the Queen website).

Adam Lambert himself was, contrary to what many have said, a fantastic front man. I was a bit worried as I hadn't really heard of him before and obviously he wasn't going to be as brilliant as Freddie but he really surprised me by being very vocally strong, with real stage presence but also very respectful to Queen and the music and so didn't try and detract any attention away from them onto himself. He knew that the audience were here to see Queen, (I didn't see any people there just for Adam Lambert) and so knew when to back down and let them take over more. Unlike Paul Rodgers, he didn't perform any of his own songs which I preferred as I wouldn't have known any of them anyway and always felt that Paul came to Queen with too much historical baggage which was one thing I disliked about him. Even Anita at one point said that she thought Adam had a great voice.

On the subject of frontmen, Freddie was played on the screen singing Love Of My Life which I cried all the way through. Turning around, Jimmy May was also in tears and was being hugged by Anita.

Queen are famous for giving a spectacular lightshow and this time was no exception. There were about 2 or 3 massive lighting rigs that titled across the stage, as well as smoke machines, fireworks, and flames during Bohemian Rhapsody, which Freddie also sang. When the flames went up you could feel the heat on your face, which was incredible as we were sat up in the circle and could still feel our skins burning. In fact, it got so hot that at one point somebody fainted in the stalls and had to be carried out, ironically during Another One Bites The Dust. After that song played, the show paused while the stewards came round with trays of water for everyone to have a drink.

The show continued but I struggle to remember which song was next however during Radio Ga Ga I chanced a look around at the audience during the handclapping part and realised that Lulu had been sitting behind me for the whole show!

I tried to get Anita to sign my program but I stupidly hadn't brought a pen so I was going to try to ask a steward for one when the show was over and try and catch her quickly. Unfortunately she was escorted out early before the show had finished to avoid being seen by too many people so I didn't get a chance, but she still took some photos with us and me and my dad both thought it was hilarious how she practically photo-bombed his filming of the show, which was in itself amazing. If you ever get round to updating this site and I hope that you will, then I could send you the footage we got. The sound quality is not that good and I know loads of other people have probably filmed the whole show properly (I saw cameramen and press there) but I have footage of us with everyone just in case anyone doubts the authenticity of my story. I know that it's pretty unbelievable!

I knew that going to see the Gods of rock that Queen are would be the most amazing thing ever but to find yourself landed in the friends and family section and having to pretend that you were somehow part of that group in order to avoid being thrown out of your seats whilst simultaneously getting to dance and get drunk with them all, was just something else. You could go and see Queen a hundred times and never get what we got that day. It was the whole experience that made it the best day ever not just the show. And it all happened purely by chance, they just happened to sit next to us, we didn't even know that they were going to be there, as well as very nearly not making it to London at all!

It really was a kind of magic.