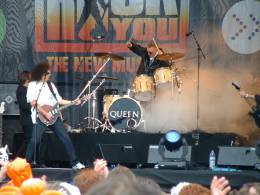 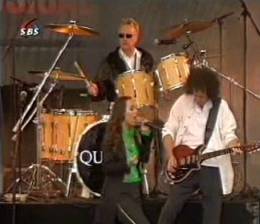 I don't know if this concert counts, but my story is about the Queensday suprise gig at the Museumplein in Amsterdam at april the 30th 2002.

It was april the 29th. I was going to celebrate Queensnight, the night before our national holiday "Queensday", or "Koninginnedag" in Dutch. But as always I was on Queenzone, and that was when I read about the rumour that Roger and Brian would be performing a suprise gig in Amsterdam. At first I thought that it couldn't be real, but then I started thinking: "I have to go to Amsterdam, even if it's not true, this is a once-in-a-lifetime opportunity. I made contact with Niek (also a respected Queenfan) and he told me he would go also with another Queenfan, but he wasn't sure also if the rumour was true. He would get an e-mail from the fanclub at what time the show would start, so I agreed with him that he would phone me the next morning if it was true. Then I shut down my computer and went to Eindhoven for the celebrations. As you all can guess, a lot of beer and very less sleep. I came home at 5 AM and Niek Phoned me at 7:30 AM. IT WAS TRUE!!!!!! I jumped out of bed, then immediatly got back into bed, too much alcohol, and started sleeping again. A couple of hours later I came out of bed told my parents that I would go to Amsterdam. In a few minutes I was on the train to Amsterdam, still I couldn't believe that it was true, still thinking that it was probably a sick joke. 2 hours later the train stopped in Amsterdam and I went for a walk of an hour to the Museumplein, I didn't even know where the Museumplein was!

At 3 PM I arrived at the Museumplein, DAMN!!! The concert started at 3 PM. I got myself a place just in front of the stage and only 5 minutes later the concert announcements man came on stage and at that moment, probably the best hour of my life, happened. Brian & Roger came on and I could believe my eyes. They started playing "Radio Ga Ga" with Roger on vocals followed by "Tie Your Mother Down" with Brian on vocals. After that Brian announced a woman to sing "Another One Bites The Dust" and I thought: "This woman can't sing Bites the Dust, she will ruin it!" But she proved the opposite, Patty Russo can sing :) After AOBTD Brian started to play something that I could't recognise in the beginning, but after he started singing I thought: "What The F#ck, a SLOW version of "Hammer To Fall"?!?!?!?!?! That's a hard rock Song!" One of the best performances of that song I've ever heard! After that, Patty Russo came back and sung "The Show Must Go On" followed by Brian & Roger singing "No-One But You" I could see that Brian was having a hard time singing this emotional song. After that the concert was going to an end and all (I believe they were 120.000) started clapping along with "We Will Rock You". For the last song Brian & Roger invited our Dutch Singer Trijntje Oosterhuis to sing "We Are The Champions". After that, the concert ended.

It was a shame the concert was so short, but I really enjoyed it very much, it was one of the best days in my life. I got back on the train to Eindhoven to continue the Queensday celebrations. I know I will remeber that day for a long, long time!!!! :)

Never thought I would see Queen in my life... I used to hate music, but then there was queen and I suddenly I loved music! But it was around the time Freddie had died... Clearly no chance of seeing them live ever again, or...

there I was walking, still quite pissed of another unforgetable 'the night before' Queensday. As we were out of beer and I thought about a supermarket that might still be open, we got of the tram out at the Museumplein. We walked up to the supermarket, but it was closed. Somehow I didn't turn around to head to the direction we were supposed to go now... not without a reason it seemed to be... suddenly I heard Tie Your Mother Down. I thought it was coming from a bar at the far right corner of the street. I thought that was great, openening with Tie Your Mother Down. As we walked on, I realized it was not coming from there and I heard it was coming from the Park. First I thought it was just played during the break of exchanging band onstage. But I was wrong again and I realized it was live. Still it didn't come to mind Queen were playing there. I thought it was a cover. Nice though, a nice thought; a song of Queen of Queensday... But when I was able to see the big screens and first saw Brian May and then Roger Taylor, I was totally stunned. Still feel the shivers as I'm writing this...

It was totally unbelievable, it truely felt like a miracle. I thought I read stories by Brian, John and Roger that they would never perform as Queen again... I can't really remember what I did, but I was fully recoverd of my hangover, and somehow managed to go further into the crowd.

I must admit it was not as great as I heard and seen some of there liverecordings on the radio or television. Brian and Roger couldn't replace Freddie by singing the songs. Neither did their guest singers do. But what the fuck I couldn't care. I was in ectasy and finally I had seen them live. One of my dreams I never thought that would come true...