Roger Taylor concertography: Guest appearances with other bands or singers in 2012 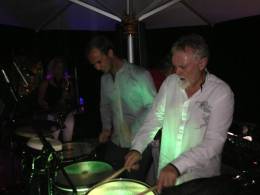 Roger and Sarina attended a Christmas Party at Mike Rutherford's house in Loxwood, Surrey. No idea about the setlist. 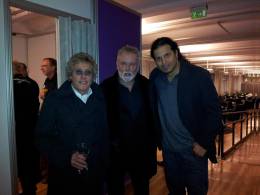 This was a private gig at a large software conference - the line-up included Roger Taylor, Roger Daltrey, Jeff Scott Soto and Patti Russo. 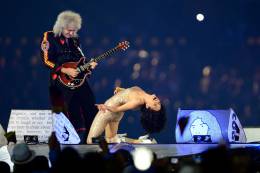 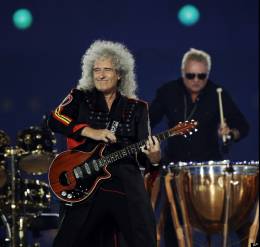 London 2012 Olympic Games Closing Ceremony featured not only Freddie's famous vocal improvisation from Wembley 1986 but also a live performace by Brian and Roger.

01. We Will Rock You (Brian on guitar, Roger on drums and timpani, Jessie J on vocals) 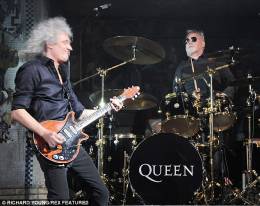 Plenty of celebrities in the audience - Robert de Niro, Nick Mason, Samantha Fox, Andrew Lloyd Webber, DJ Chris Tarrant, original cast of We Will Rock You and others. Brian played in BoRhap as always (during the final 'any way the wind blows' line a virtual Freddie was supposed to appear but in fact nobody saw anything. Roger played only in the last minute of Show Must Go On because according to his tweet, 'Spinal Tap moment for me drums failed to appear due to lift failure'.

Another performance at the American Idol, this time with the Queen Extravaganza band. This is a new reworked version of Somebody To Love and it does sound great!

01. Somebody To Love (Brian on guitar, Roger on drums)

Unless the broadcast was cut, the finalists seemed to perform just a five-minute medley of those four tracks.

Waste were the 'Apres Ski Band' in hotel Farinet and Roger joined them for a cover of The Black Keys' song. Also Sir Richard Branson and Sir Bob Geldof were in the audience. One of the security guys later explained: 'They just turned up unannounced as Roger only just arrived in the resort. I knew he was heading there as my girlfriend at the time worked at The Lodge which Richard owns - turned up with 2 guests (Bog Geldof & Roger) and Richard asked the band during a set if Roger could jump on... they couldn't refuse!'