Brian May: Guest appearances in 1991

Brian May concertography: Guest appearances with other bands or singers in 1991 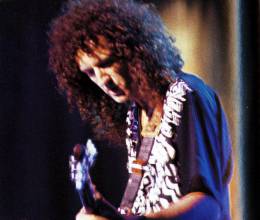 A significant part of his first proper solo album (Back To The Light) was already finished and Brian was asked to organize a concert of guitar legends for the Expo '92 exhibition in Sevilla. He certainly did a good job - his guests included Joe Satriani, Steve Vai, Nuno Bettencourt and Joe Walsh (all on guitars). The show lasted over two hours and was broadcasted all around the world.

Brian did two interviews (with playing) that day. First the regular interview on the radio tour and later that day came an actual performance in a HMV Superstore - playing along backing tracks and answering questions from the audience.

Some sources say the date was May 14, 1991 but that's wrong because Brian was recording Mother Love with Freddie in the studios in mid May! 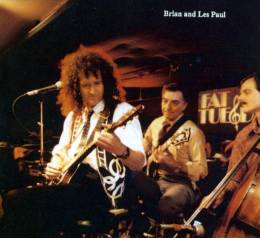 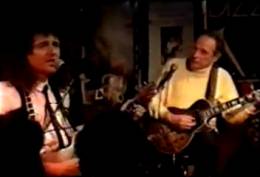 The gig was played at Fat Tuesdays, a small nightclub that Les Paul played once a week for many years. On this night, they were filming part of a home video called Guitar, narrated by guitarist Jeff "Skunk" Baxter of Steely Dan fame. But the released video included only part of Early Morning Blues.

This is a newly discovered Brian's appearance - apparently an All-Star jam with James Hetfield (Metallica), George Lynch (Dokken), Taime Down (Faster Pussycat), Bruce Kulick (Kiss), Bob Kulick (Meat Loaf), Phil Soussan (Ozzy Osbourne) or Steven Adler (Guns N' Roses). I've never heard of this event before but there seems to be replica T-shirts and posters available so it was probably a famous concert.