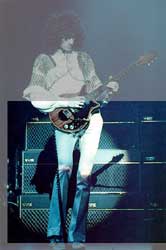 Brian May is most famous, besides his amazing skills as a performer and his trademark hairstyle, because he made his own guitar with help from his father. It was originally labelled BHM, which were his initials (the sticker is still visible in some early Queen videos), and when the logo peeled off the guitar (which coincided with Queen's increasing popularity) was known as the Old Lady, the Fireplace Guitar or, most famously, the Red Special.

That's the guitar Brian's used for most concerts and recording sessions, but not by any chance the only one. As any guitarist could confirm (even an amateur one), the guitar is not the most reliable of instruments: the strings are delicate enough that they may wear out and break at the worst possible moments, and of course it'd be preposterous to stop a concert, change the whole set of strings (as the sound would change a lot if only one were changed) and then resume, so from summer 1973 onwards Brian's always had spares (usually more than one) which he can use for those cases. His roadies have been trained to quickly give him the spare guitar, take the Red Special, re-string it and quickly hand it over to Brian so he can have his trusted instrument back as soon as possible.

Brian's main spares have been:

Besides those, it's worth noting that Brian used some other electric guitars for some specific cases, the most famous being the 1978 Fender Telecaster with which he played the third verse and solo from Crazy Little Thing Called Love in the 1979-1986 era, except at the very last concert (Knebworth Park) as he had tuning problems so he switched to the Red Special.

Amplification's always been based around Vox AC30's, which are then fed to the P/A via external microphones. From mid-1970s onwards a large wall of amplifiers was erected every concert, but it was mostly for visual impact - Brian mostly used one to three amps (with different settings so he'd get a richer sound) and during the Brighton Rock solo two others were switched on so the signals wouldn't interfere with each other.