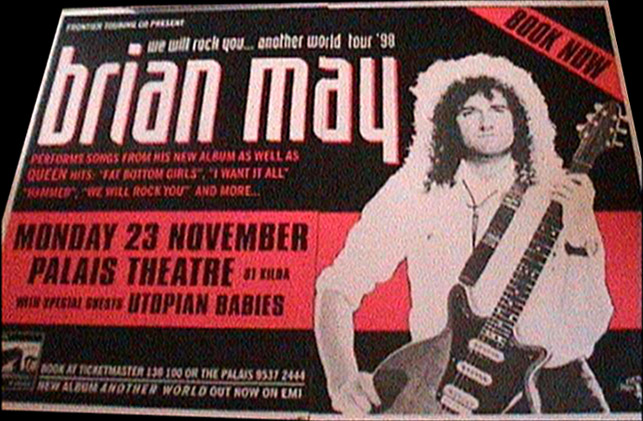 Well finally after waiting what seemed a life time, I finally got to see my idol. I was lucky enough to get front row tickets for the show as I was one of the nutters that queued up in the early hours of the morning the day tickets went on sale, but it was well worth it. The support band were quite good, but that wasn't the reason the 2000 strong crowd had come to see one of the legends of the business.

The show started, as per the European gig with the announcement that Brian was running late & his cousin would come out to entertain us. I must say that I knew this was going to happen, but Brian did look great dressed up like that & the majority of the crowd had no idea it was him. His Twitty act of Only make believe & C'mon Babe was quite good & funny too....making jokes between the songs......being front row....I saw Brian walk off & make the switch with the "fake" Twitty. At the end of the song.....the lights came up to relieve Brian in the now famous tree stance & go into Space & Since your been gone.....this really got the crowd going & the sound was brilliant from the front of the stage......finally seeing Brian live in full flight...my dream had come true!!! Chine Belle followed with a bit of Chinese torture as the intro.

It wasn't until the Queen Medley that Brian said to everyone to do what you want....get up & make some noise....& they did. There was a rush of people to the front of the stage & the band went into some great versions of Fat Bottomed Girls (with Gimme the Prize solo in the middle), I want it all, Headlong, Tear it up & The show must go on which was absolutely fantastic......at the end of the song the crowd went nuts & Brian just stood there for a minute & soaked up the atmosphere.

Neil's Bass solo followed this & I must say for a person who is generally not a huge fan of Bass solo's, this sounded great!!! It was amazing to hear the sounds that he got from it, including a guitar like section. The band came back into stage & went into Last Horizon which sounded great.....seeing Brian only standing a couple of feet in front of me playing the guitar like that was a unreal feeling.....it felt like a dream.

This lead into the acoustic set which the crowd seemed to really get into. We sang our hearts out during Love of my life which Brian commented on sounded great. He then went into an acoustic version of Too much love which everyone wanted to hear, Driven by you the intro to 39 & One my way up, then followed by The slow version of Hammer to Fall. I had been reading about this & wondered how it would sound.....I love it & the audience really got into as well & sang along......He finished off going into a bit of the "real" version which rocked!!!!

The time I had been waiting on was next.....the guitar solo......to be standing dead in front of the stack of VOX AC30's & hearing the sounds that the master gets from his guitar was certainly one of the highlights for me. The look of concentration on his face says it all when he is playing. I noticed that he shakes his head a lot.....I'm not sure if he believes he not playing it right or not.....but for the crowd they loved it. He went into section of I still call Australia Home/Waltzing Matilda which is basically like our national anthems. The guitar solo lead into Eric's drum solo including the flaming sticks which looked great with all the lights off & just seeing these 2 balls of flames flying around.

The band rejoined the stage for Resurrection & a great version of Rock you with Eric initially playing the famous beat only using the cymbals.....this put a big smile on everyone's face. A kick ass version of Tie your mother down followed which seemed to go on forever which we all loved until the band said goodnight & walked off......the crowd fired up screaming more me which we got.....Brian walked back out & spoke to us before going into Another World & All the way from Memphis & just when I thought they would go off.....Brian wanted to keep going......& finished the close to 2 & a half hour show with No One but you which we all sang our hearts out again. I was lucky enough to score one of Eric sticks & also the song list off the stage. After the band said their good byes to the adoring fans they left & a few of us ran around the back of the stage & after waiting 45 minutes in the cool night, Brian came out & shook my (& a few other peoples) hand before getting into his van & driving off.

I have to say that although I have been a die hard Queen fan for years & years.....it would have to be the best live show I have ever seen. The sound was fantastic, the group was on fire....Brian was very warm & funny with the crowd constantly talking with us & telling jokes (including the story about how he had just bought this little acoustic guitar in a local store & when he got it home it did this (went into a great electric solo).....the crowd loved it & could see the warmth that the man shared with the crowd).

If you read this Brian.....you are the greatest.....thankyou for a great night.

The show was really Great!!!, I can't belive I was there, I have only 17 years old and I couldn't move myself when Brian starts to play!!!, When I saw that guitar in my front (cause I was about 2 meters of him) I couldn't do nothing!!!!, I only sing all the way on the show, as well the new songs cause I know every single letter of the Another World album!!!!

"Love of my Life" was great, as well as " Drive by you ", during the Queen Medley, things sounds so similar as Queen, that I could see F. Mercury singing there!!!!!!

Brian guitar sounds for me exatly the same as sounds at Queen!!!, and Brian is every day better!!!!!

Brian is always funny!!! talk every time with the us!!!!, this history about his acoustic guitar that he bought on a store during his walk at Melbourne was great!!!, but Brian said on the start of the show that 25 years that he was here the last time!!!!, I thing he is wrong!! Queen came to Australia and played in Melbourne in 85 ( I don't know if I'm wrong) anyway, the top pf the show, the best part for me was when he finished "We Will Rock you" and start "Tie your mother down" realy amazing!!! I was thinking before the show start when the suport band call "Utopian Babies" was playing (the lead singer of this band was relly funny, and the band was quite good). So I was thinking when Brian starts play "Tie your mother down", I will not stop jumping and scream, but when he really start the song on the show, I could't move my self, something amazing happens, I didn't move and didn't scream, only look Brian play!!!!

So it was a great show!!!!! If you can going to the nexts Brian show, don't miss it!!!!!, I'm sorry about my wrong english!!, cause I'm only a young 17 years old boy from Brazil, And I'm here in Melbourne to doing a 6 months english study course, and have luck to get this great and amazing show!!!!, I went alone, and back home alone by walk (no more trams), just hearing my walkman with a Brian disc, and singing alone!!! That's it folks.