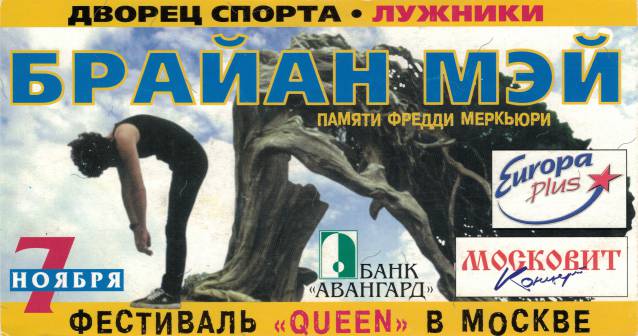 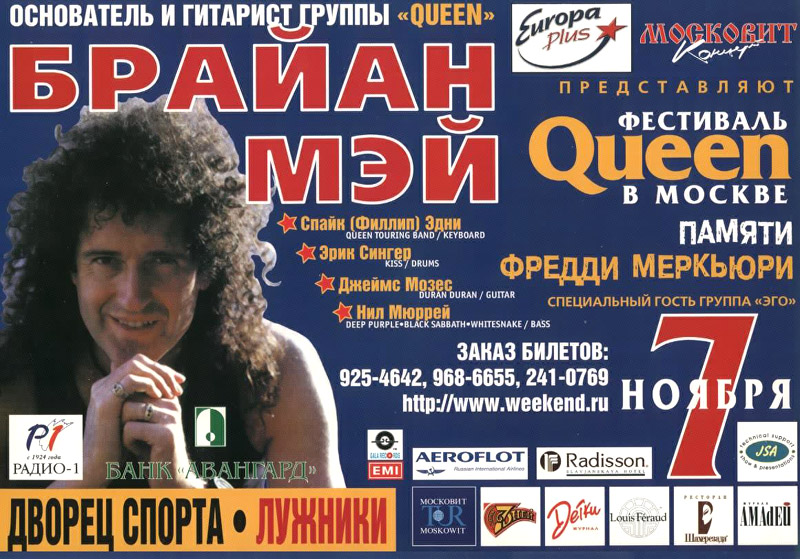 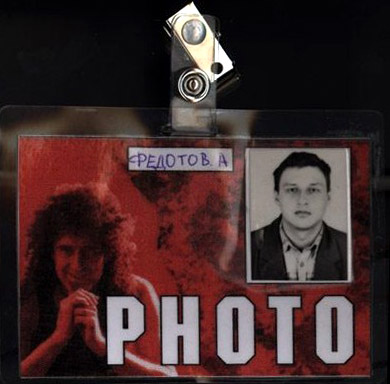 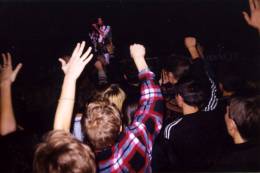 The advertisement of Brian's show started at just two weeks before it and only the Internet users could know about the forthcoming gig. But on the week before concert some TV channels and radio-stations made some announcements (Brian was introducing as 'the guitarist and founder of the legendary band Queen' though I think it's a very arguable introduction). I don't know why but the forthcoming show was named as 'Festival Of Queen Music'.

Brian gave a press-conference in Moscow, he said there that he 'can never hear the Tchaikovskiy music without tears falling from his eyes' and that some Queen songs were inspired by Russia and Russian music (in my opinion "Funny How Love Is" is in very Russian folk style).

Before show anyone could buy CDs of Queen/Brian, magazines, posters, etc. (even Roger's "Electric Fire"). 'Till the show started no-one in the audience could say for sure if this miracle would come true - we couldn't believe until the first chords that Brian May was playing for us in our home town. There were few guys who became Queen fans in the mid of 70s, we were living behind the iron curtain at those times and it was incredible hard to get Queen's LPs, so those guys were very brave to listen to Queen music. For about 20 mins before the show I've heard how Eric was rehearsing 'We Will Rock You' bits during the soundcheck so since this I was sure that concert would happen. Gates were open at about 7:25 pm. The support band had to be "Ego", but for unknown reasons another band played instead of them (sorry, but I don't remember their name) - they started for 7:40 pm, I think. They performed few instrumental versions of Queen songs in Russian folk style (on 'balalayka' and other Russian instruments): Bo Rhap, Mustapha, Friends Will Be Friends (on the chorus the whole audience began to sing without any orders), Don't Stop Me Now etc. Guys received a big applause!

Then on two big screens near the stage were broadcasted Queen videos (in the bottom corner of screens there was the Queen's crest and name of band like on "Queen Rocks" album): Bo Rhap, We Are The Champions, Another One Bites The Dust, A Kind Of Magic, Under Pressure, Radio Ga Ga (half of the video). People sang every word to these songs. After a few mins the show starts with "Dance With The Devil" (taped). It's Only Make Believe, C'mon Babe, Space, China Belle, Since You've Been Gone, Fat Bottomed Girls, I Want It All, Headlong, Tear It Up, The Show Must Go On, Neil Solo, Last Horizon, Love Of My Life (I ain't sure that intro was from "Is this the world we created...?" as on some other shows from 'The Another World Tour'), Too Much Love Will Kill You, Driven By You, '39 (intro), On My Way Up, Hammer To Fall (slow/fast versions), Brighton Rock Solo (feat. Kalinka - a Russian folk song, he played this for once especially for Russia), Eric Solo (with much fire, of course), Resurrection, We Will Rock You, Tie Your Mother Down, No-One But You, All The Way From Memphis. My apologies if I forgot something and for possible incorrect order of songs.

First Brian's words after 'Space' were: "Privet Moskva! (Hi Moscow) Let's rock!". During show Brian said a lot of Russians words ("spasibo" - thank you, "otlichno" - fine, "do svidanya" - goodbye etc.). He even said a pretty long sentence in Russian, I guess he wrote it on his hand (at one moment he looked at his palm just like Fred did in Budapest 1986 when he sung the Hungarian folk song). Brian spoke without any accent at all! He was good at Russian language. Brian joked during show and said some warm things to us, to Moscow. At one time he just stood on the stage and suddenly look at one of his crew members and said: "Ladies and gentlemen, this is Steve!". We applaused to this guy and he was really shocked while Brian just smiled. Before acoustic part he told story about the acoustic guitar that he bought what happened later (y' know this story). From his band he introduced only Neil Murray before his solo (I still can't believe that a bass guitar can make such sounds, how did he did it?!). 'China Belle' was a tribute for Cozy now, and 'Love Of My Life' to Freddie. Audience sang along to every song, Brian looked very amazed by that. The major part of the second verse of 'The Show Must Go On' was sung by the audience ('TSMGO' is one of the most ever popular songs in Russia, it even won Russian 'song of the millenim' poll). Brian played a very good version of 'Too Much Love Will Kill You' but before it he apologized that he can do few mistakes because he didn't sing it for long time.

Before 'Hammer To Fall' he said something like "when this song was written, I even couldn't believe that this miracle will happen that I come to Russia". For a few moments Brian was about to cry because audience during few mins went on to applause and didn't want to stop. Brian was thrilled - we got him drowning in the applauses. Audience was about 8 000, perhaps, one of the largest concerts during that tour. 'All The Way From Memphis' was the last song. I would call it 'All The Way From Moscow' (he wished all good things and peace to Moscow and to 'beautiful people of Moscow') because in the end of song he and the girls on backing vocals sang a long vocal impro with only one word repeating ('Moscow') and in chorus it was 'All The Way From Moscow' and I think instead of 'My axe was cold' he sang 'They said Moscow is cold'.

Show's over at about 10:35 pm... Brian May leaves the stage as the last one from the band. I still can see his hair behind one of amps and he then disappeared backstage. The end.

I was sitting on a VIP seat during the show and there were a lot of Russian celebrities around me, such as the Russian young pop-star Rodion Gazmanov (he's a son of another Russian pop-star) who was sitting near me.

TV news marked that concert as one of the greatest events of the month and as the best rock concert of the year (little notice: few weeks before Brian there was Moscow was the very first concert of The Beatles' member - it was Ringo's show, and weeks before Mr Starr 'The Rolling Stones' made their first appearance and concert in Russia, so Brian beat 'em all).

When I was back home after the show I've got one thought: "Brian thrilled me to the bones, it was absolutely amazing... So what should be my reaction if I'd see them all live - Brian, Roger, John and Freddie?!". It's still one of the biggest regrets in my life that I'd never know how would it be...

Peace and love to all Queen fans over the world!

Almost all of the biggest TV channels were putting announcements about Brian arriving in Moscow. The day news declared that 'legendary queen founder Brian May was coming to Russia'. They added that he would perform some old stuff but he was always engaged in new style creation.

The evening news showed the moment when Brian stepped from St.Peterburgh - Moscow. He looked, as always, cheering and smiling. Some people gathered to meet him at the station and were presenting him with flowers. What a welcome!!!

Then I saw some fragments of Moscow show...the audience was biggest of the tour yet. Not less than 10,000 people, it isn't surprise for me 'cause queen is very popular in USSR territory.

Press conference has also been shown, Brian talked about Russia. I hope that the Show has been filmed and will be shown on Russian TV, which I will record.