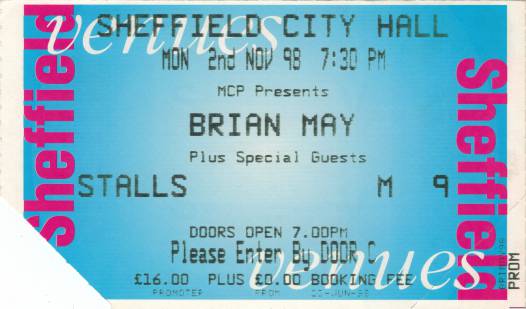 Well slap my arse and call me Charlie. Hello, hello - back again from the 24 hour sabbatical.

This just gets better and better. Official parking permit slapped on the car as soon as we arrived, boot full of posters that the venue had no use for anymore, and a bunch of people waving and shouting 'Hello Queen Heaven'. (Jackie tells me she's had emails from people asking where the hell they can see the QH car - well, if anyone's in ANY doubt at all, here it is again. It's slightly different now, as the hood has now been signed by Miami Beach, Trip, Spike, Eric, Jamie, Neil (see below), Zoe and Suzie, as well as Clayton Moss, after having had quite a few sherberts...)

The car was signed at the Albert Hall, and everyone had the same reaction - "Sign a CAR?? Are you serious?? Where is it?" leaving us to lead them to it, and abandoning the hordes of autograph hunters, who had no choice but to follow and then use the hood as a table. (Sorry I shouted at you to not damage the car, Eric - it was the heat of the moment :) ) Roger was there, heavily disguised as Inspector Clouseau, and there was a rumour that John was there too, but, unsurprisingly, no-one spotted the invisible man. We're almost always parked within spitting distance of the stage door, so you got no excusenot to find us :)

I'm told by the various bootleggers that they have excellent tapes of all the UK shows so far - appalling, isn't it? Incidentally, while I'm off on thistangent, I might as well mention that anyone in South America might like to watch this space for 'possible' fast-breaking news. Not allowed to say anymore this early in the review ;) I also spoke with Norbert who does the merchandising for this tour while in Manchester, and we're planning something so that those of you who weren't able to get to any of the shows can get the merchandise via the web - watch this space.

Anyway, life is definitely on the way up - it's just a bit of a shame that this is the penultimate show of the UK tour, I'm badly missing all my mates on IRC (lo Cooli, Burpi, Daz etc etc..) and that it's been pissing down with rain all day. :( Still, the Queen & Wyclef Jean single Another One Bites The Dust came out today in the UK and we were amazed to see a big display for it in the local Virgin Megastore, and that at least 3 people bought a copy while we were there. According to the stickers and the displays, it's already in the Virgin store charts.

Anyway where was I? O yes - Sheffield. We got hold of Neil tonight (we shouted to him through the glass door to come and sign the car, and lo and behold he appeared less than a minute later) and had a few words with him. On Cozy: "It's very hard for anyone to replace Cozy, and Eric's doing a great job. He knows all the Queen songs by heart, and anytime Brian starts strumming or playing around, Eric joins in almost immediately. Even songs WE don't know!"

On Eric: "I've been in bands that Eric has, but not at the same time, like Gary Moore and Black Sabbath. We auditioned Eric for Sabbath ages ago, but this is the first time we've really played together."

On South America: "I shouldn't think they'll go without me, do you? South America isn't really finalised or confirmed yet, but we're going to Russia on Thursday, and THAT isn't finalised yet either"

On signing the car: "I'm happy to sign stuff for people, but I don't get recognised as much as Eric and Jamie - the girls don't chase after me, so I have it reasonably easy, but whenever I'm asked it's great"

So...the show. Support band tonight were Sixstoneseven, again, a local combo. Competent, laid back, relaxed. Not so angry fey vulnerable young men with a touch of Oasis about them. Surprise, surprise, their next gig is supporting Billy Bragg. Some of their stuff seemed to have been lifted directly from other people, in particular the chorus was vocally pretty much Bowie's Starman. They wore cool hats too.

This venue was yet another City Hall, but for a dramatic change, a gorgeous interior. Very camp elaborate ceiling. Huge globe light. La de dah...

8pm - The cry went up "Come on!!" and loads of people rushed to the front. This was going to be a much more laid-back (security-wise) show than previous ones.

Couple of things: Jamie fell off the stage a couple of times. After 39, Brian started some strumming, and said "I just wanted to do that to confuse the band. I'm trying to be Bob Dylan" Jamie and Spike were indeed confused :) A couple of people then shouted out "We want the story!" which threw Brian, who then said "Bought a guitar, sounded like this, took it back - that's the story" then went into Driven By You, completely forgetting that it was meant to be On My Way Up. With A Little Help From My Friends was played, presumably in homage to Joe Cocker, a local lad. No NOBY. Not very much else was particularly special about this show (which is why there's so much waffle above) - it seemed to be a little flat, in fact. Maybe that was to do with us sitting in the Grand Circle instead of the stalls, but who knows. I know that friends who were downstairs thought it was excellent, though. At least I haven't said "This was the best show of the tour" YET again.