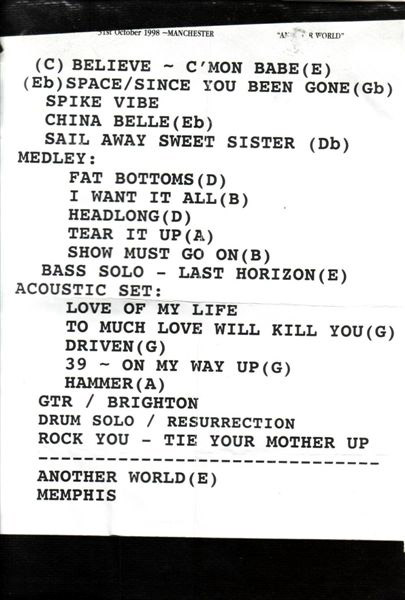 Geordie crowds may be notoriously excitable, but this time Manchester tried to beat them. This was about the noisiest concert ever for the parts where there should be lot of noise.

Well, to start at the beginning: Support act were Deadline, a rather good heavy metal band, warmly welcomed by the audience. For smokers like me it seemed ages until Brian showed up, as in Manchester's Apollo smoking is not even allowed in the bar.

But finally Twitty Conway appeared on stage welcomed by cheering and clapping like thunder. "Hello, citizens, I'll try to bring a little sunshine to you,so here's a little song I wrote last night in the solarium" was how he introduced C'mon Babe.

The cheering and shouting was soon rewarded by a wonderful and extra long guitar solo in China Belle, and, as with last night, Sail Away Sweet Sister. "I had a look on the website yesterday, and this was the most requested song there. Seems to be the most famous unknown song." The Show Must Go On followed and Brian looked very moved by the way the crowd joined in..

By now, there was no chance to get to the stage, as the place was packed with people standing up all along the aisles. The place holds 1500 and as far as I could see no seat was empty. (In fact, before the show the touts went along the queue outside in search for more tickets).

Back to the show. "This is the moment when I take my courage in both hands", Brian said after the change to the acoustic set. But as always, people were overwhelmed by Love Of My Life. Most astounding to me was the absolute silence when it came to the solo in the song. You could have heard a pin drop. That silence was followed again by thunderous applause, and maybe it was that behaviour during the song that made Brian again change the setlist: "I'm not making excuses, but, actually, we haven't rehearsed this very much. We'll do this because it's Halloween", he joked, "because it is a song about killing. I wrote this at a time of my life when I found out how it is to love one person too many."

This was the introduction to a most stunning and moving Too Much Love Will Kill You - never done before on the UK part of this tour. And, of course, the crowd went mad at the end of it again.

It seemed that the band enjoyed the playing as much as the audience. Brian smiled a lot, and tailed Driven By You with the comment, "A little song that gave me lot of freedom in the world - thanks to you. So - thank you."

At the change from the acoustic set to the electric one, Brian joked again: "We do this to prove that this is not a tape, and not a DAT or sampler either. It's really live. Does anyone else wanna make any noises?" As expected, the place erupted, and the "Brian, Brian" chanting took over.

Slow Hammer To Fall once again moved the crowd as did Eric's fabulous burning solo. Resurrection brought the backing singers to the front for a great pose with Brian in the middle and the two beauties on the stage either side of the catwalk.

The only reason that the following We Will Rock You and Tie Your Mother Down didn't get more people up on their feet was that everybody who was able tostand, jump and clap was already doing it.

Yet another silence took over when Another World started, and not before the end of that song, Brian remembered to introduce the band. He used the break of Jamie's solo to get between the backing singers and dance a few steps with them. Spike was introduced as the "newly born blonde - sorry, born again blonde, I should say."

Every member of the band was welcomed with huge applause and cheering, the background singers got some extra whistles (obviously coming from admiring men in the audience), and sadly a wonderful concert ended right after All The Way From Memphis.