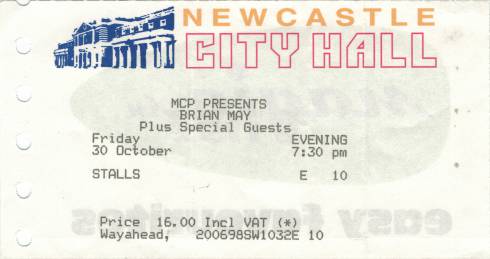 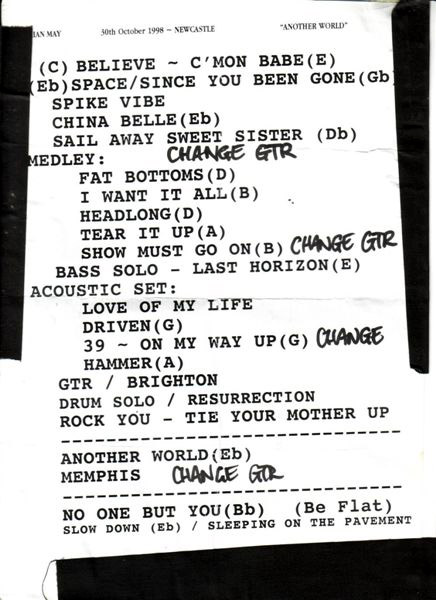 Here we are again. Civic Hall style venue. Small stage, and the curtain lowering was a bit late tonight. However, Geordie crowds are notoriously excitable, and even as soon as TE Conway was introduced, the place was rocking. Security, like the Bristol crew, weren't letting people to the front ofthe stage, but the atmosphere generated by the Newcastle audience more than made up for this.

Before the show, people were coming up to us and chatting away as if we were old friends (Hello Ernie & Andy). It's not so grim oop north after all.

Anyway - Brian was introduced by the Twitty doppelganger, and I haven't heard such a thundering reception from a crowd before. At the end of Since You've Been Gone, the ovation lasted a full 2 minutes before Brian was able to gather his wits and speak. "Boy o boy - that's what Newcastle sounds like!" Obviously this was met with more roof-raising applause.

It was great to hear Sail Away Sweet Sister again (This truly is performed stunningly, and this was not unlike hearing Queen play at the absolute height of their performing career) and Brian was visibly sweating and grinning more than he had been so far on the UK leg of the tour. "What very nice people you are - it's been too long, that's all I can say... you in the mood for some jumping and singing along? 'Cos I'm sure you all know this old shit" and we were into the Queen section once again.

Neil's solo came and went, and I have to admit I'm beginning to enjoy this now...

"There's something special about tonight, in the days of video, TV and tapes, a little bit of reality is what keeps me going" was the intro to LOML.

Then it was band intros. Spike is milking his intro more and more, and tonight he mimed an over-elaborate "I Love You" and Jamie was just as shameless with his bows, forcing Brian and Spike into fits of giggles. Then it all fell apart - "If it was all smooth, you'd think it was a tape - there's no bloody tapes here, no bloody clicks, no bloody samples" Yes, Brian, we know you can do it, and we know you don't need tapes. Preaching to the converted here, matey.

Then it was as normal all the way, and after TYMD Brian said "All I can say is that Newcastle fucking rocks!" and they were gone. The delay for the first encore seemed a bit protracted, but he finally returned for Another World.

Now then, something that has been happening during the UK dates is a bunch of people at the front screaming the "Wakes Up" line. This time, however, when they did it, Brian stopped singing (and the band played on) and he said to them directly "You know, I hate that. It was funny the first time" and then seamlessly picked up the vocals for the next chorus. But the words were lost on the Banshees, as apparently they asked a friend "He spoke to us!! What did he say??" This group, incidentally, are the same bunch that has been stopping Brian sign stuff when he arrives, as they are always arriving an hour before the band, pushing the local people who have waited for sometimes 6 hours, out of the way, and literally demanding autographs as if it was their right.

There's nothing wrong with wanting to get autographs, of course, but it's worth noting just what an effect this pushiness has on Brian, and if they're reading this (and I hope they are), then please, pretty please with cream and sugar on top, fucking well behave in future and don't screw it all up for people who don't get the chance to meet him often. People who say things like "I'd be more than happy with just a handshake."

Last night, though, was different. Someone (Can't think who...) fed them false information about when and where the bus would be arriving and the result was that when the bus came, and the mob were a block away, Trip got out, and said to the local lads who had been told where the best place to stand might be "Don't you guys move". At that point it was clear Brian was going to sign, as they'd obviously seen that the usual heavy-handed mob were nowhere around. They got their autographs, as well as their handshakes, borrowing my bloody gold pen which Brian was in danger of waltzing off with. "Get it back" I said to some poor lad, who then found himself in the embarrassing position, having met his hero, of shouting "Gaz needs his pen back - please don't walk off with it!" and seconds later I was once again clutching the pen that everyone seems to want to borrow. It's moments like this that make life worth living. Brian did, in fact, then sign for a good ten minutes, leaving Spikey and the rest to slip in pretty much unnoticed. Anyway, I'm digressing and ranting needlessly...

This was by far the best UK show, competing, I'm told, with Hamburg for the best show of the tour thus far. There can be no other explanation for this than the fantastic warmth from the Geordies. Thanks Newcastle. Queen Heaven has a lot of friends along the Tyne now :)