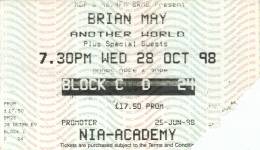 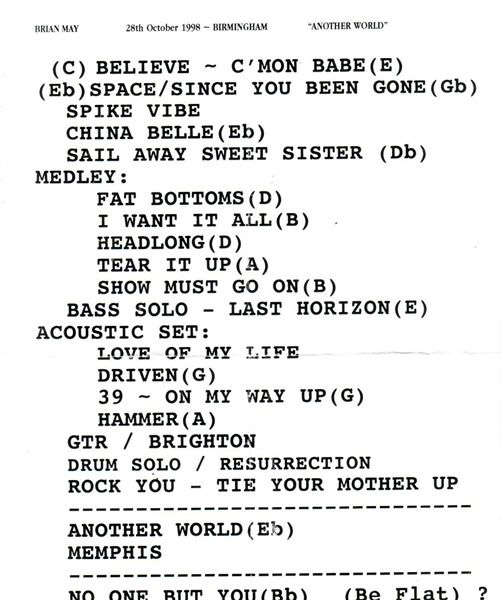 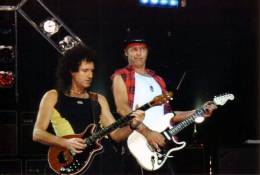 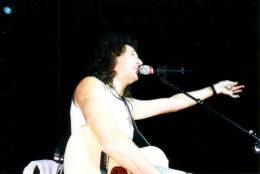 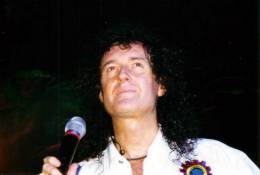 Waiting 3 hours in the freezing cold wind and rain, lots of false alarms, chatting the security guard up, being ordered out of the backstage compound and seeing some guy with a pocketful of fake passes did nothing to improve the sour taste left in the mouth after the horror that was Bristol. The band eventually arrrived at 5.20 and rushed straight in - the only one who stopped to chat and sign. Brian simply said "sorry folks" and was gone. Perhaps we weren't the only ones still smarting from Colston Hall.

To cut a long story short, we all met up, had drinks, and went inside. The support band were Hangman. One of their own songs, Be Careful What You Wish For was pretty good. This local Brum band were clearly influenced by Queen circa 1973, but they haven't copied them. "This is great - we only play little clubs. This is top banana - respect to Brian for giving us the chance to play here."

The National Indoor Arena is an odd place. Used usually for huge tv events like Gladiators, this evening it was curtained off into a smaller space, creating a slightly more intimate auditorium. Basically in two areas - stalls and raised bleachers. The stalls though, had lots of space around the seating blocks, and surely this could mean only one thing - that the security wouldn't be restricting audience movement. Sure enough, within 10 minutes of the support finishing, the front of the stage was steadily filling with people abandoning their seats. What a difference a day makes...

This show was everything a Brian May concert should be. The whole band shone through and everyone was having fun. "Good evening Birmingham - We're all relieved to have got London out of the way.....and Bristol. This is a much better place than Bristol.." was Brian's teasing comments after China Belle. Then there was a real treat with Sail Away Sweet Sister - "We haven't played this before - let's see how it sounds." It sounded, of course, fantastic.

"Here's what we called a medley back when I used to play with the Frank Chatsworth Orchestra" preceded the Queen section, and the whole place was on itsfeet. The area in front of the stage was, by now, full.

Lots of great moments - Spike hand-jiving to Jamie's solo, Brian deliberately introducing Spike as Neil Murray, Brian and a little lad about 6 feet away,who was on someone's shoulders, during WWRY exchanging huge grins, the SUPERB Brighton Rock solo - if there has been a defining moment in Brian May'ssolo career, then tonight was it.