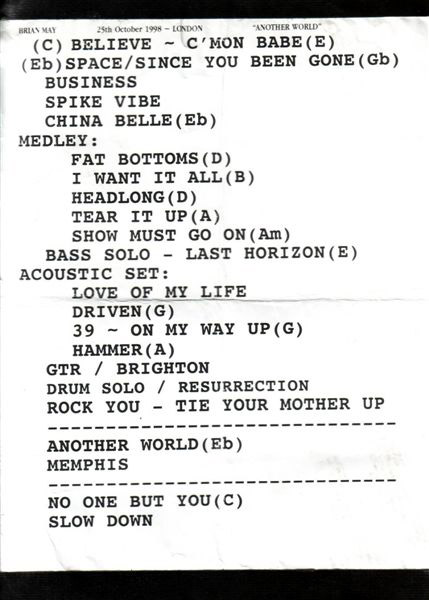 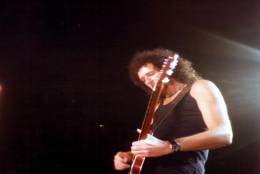 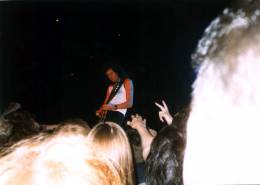 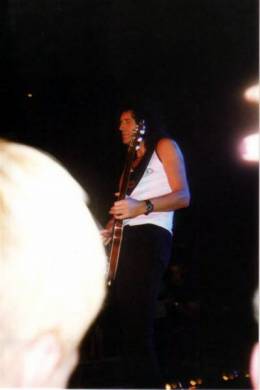 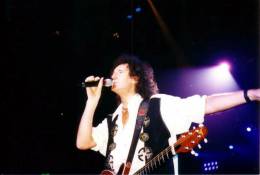 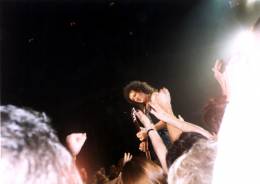 What a performance the whole day turned out to be! Arranging to meet a bunch of people at Garden Lodge turned out to be not as straightforward as we thought. A hellishly cold day and the traffic was appalling, resulting in us meeting up with people about 2 hours late - it's not as if they could havewhiled away the time looking at the wall - it is now hidden by scaffolding and has been completely scrubbed clean. Anyway,eventually we managed to be at the same place at the same time as everyone we were meeting, and then promptly decided to troop off to the Albert Hall. Only 5 could fit in the QH tourmobile (The Red Special) so a cunning plan was hatched (Won't go into it now), the end result of which was the 5 car peeps ending up waiting at theAH for over an hour in the freezing cold. O well - at least we had the pleasure of endless streams of people admiring the tourmobile :)

So - the show. I'm afraid to say that the QH crew spent the whole of Then Jericho's set in the bar, generally being net nerds and acting superior. Apparently TJ were great - even to the point where Jacky got a phone call from someone who thought they were better than BHM (?) It takes all sorts, I suppose.

Although Brian has typically been starting the show at 9.15pm, the Albert Hall has a 10.30pm curfew, so, with a two hour show, starting at 8.40pm (which, in the event, is what happened), was already pushing it.

You all know by now about the Twitty Conway opening gag, so we'll take that as read, although it has to be said, that it's a very impressive switch.("It's sure nice to be playing in this here famous Albert Square - I thought you'd like that" - an arch reference to the name of the Albert Hall punning the name of the fictional Square in the UK soap, 'Eastenders' which Anita Dobson was once the star of) There were SO many people sitting near me who were arguing about whether or not it WAS Brian :) As soon as Brian appeared on the stage left podium as himself, the Albert Hall erupted. Space segued into Since You've Been Gone as the tree drape raised and Brian was clearly very happy to be once again playing to his home town crowd as he postured grandly in front of the impressive radiating starburst lighting rig. Eric Singer was already working his buns off, and Brian's solo on the downstage catwalk whipped the already ecstatic crowd into fresh raptures. The air was filled with punching hands, and, surprisingly for a venue this vast, even the upper circles and the gods were alive (and quite possibly walking the streets of Kensington).

"I should mention that this is a tribute to the late great Mr Cozy Powell" as Business thundered around the fabulous acoustics of the historical hall (Smile played here a lifetime ago). "It's been somewhat of an up and down road,but it's great to be back here - thanks for making it possible. This is afabulous place to play - I hope you're getting as much out of this as I am" Then it was China Belle ("Can I have some Chinese atmosphere please, Mr Edney?" and virtuoso Spikey was away on his Vangelis impression). The band then romped merrily through the Queen section, and by Show Must Go On, Eric Singer was just a mass of arms and hair - this guy knows his stuff.

"I'm about to throw myself into the lions den - a great song is a great song forever" as Love Of My Life (with an intro stolen from Is This The World We Created?) slayed anyone left unmoved by the show so far. As already mentioned, the acoustics in the Albert Hall really are remarkable, so when the audience sings their part, you don't get that annoying delayed effect - everyone is together, and, wonderfully, in tune.

"We've been doing this all over Europe, and Eastern Europe, and often making little speeches where no-one understands a word I say. Maybe you understand me - people often don't!" was the cryptic introduction to Driven By You, and the crowd were back on their feet.

Time for Jamie's introduction, and an extended piece of melodic faffing about after which Brian introduced the band. "On silken brunette vocals... Miss Suzie Webb. On silken blonde vocals, Miss Zoe Nicholas... and on silken blonde keyboards, Mr Spike Edney." Slow and fast Hammer To Fall followed (spot the solitary blow-up hammer and the also solitary but even more conspicuous by its bizarreness, blow-up banana) and then it was earthquake time. Brighton Rock, Resurrection (no flaming sticks - the Albert Hall is a listed building) with Eric pretty much blowing most other drummers out of the water. We Will Rock You was accompanied by a sea of upturned palms, and the audience singing came very close to drowning out Suzie and Zoe. By Tie Your Mother Down it seemed there was to be no surrender, and it sensationally ended with a typically bombastic series of smoke explosions not seen since the Hammer To Fall video.

We managed to get through most of the show without it, but, in time honoured 'O this is a slow one, and I'm a sad old rock chick, (more of a turkey, infact) so this is what I'm meant to do now' fashion, the hand-held cigarette lighters came out for Another World, although, thankfully, there were only 4 people doing this horrid thing in the whole place, and one of them burned their fingers within 30 seconds, which was nice.

All The Way From Memphis, and Brian was so engrossed that he forgot to be near a microphone a couple of times. This man was having fun ("You wanna do it?? C'mon then Spikey!")

It was all over. A bit of presumably well-rehearsed confusion and then "This was going to be on the album, but things happened, and it became the last Queen song" NOBY, of course. This was - the - moment of the night. A man playing in the venue where he played his first professional gig almost 30 years before, performing a song dedicated to someone that Brian has spent much of the three decades since with, who lived - and died - a stones throw from this stage. Brian May has come home - all the way from another world.

Special mentions to Hoops, Ste, the Tunneys and Andy Green - that was a night, that was!