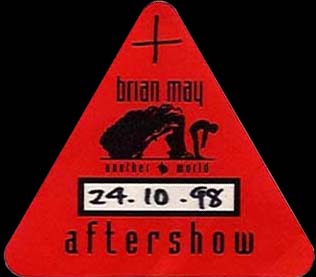 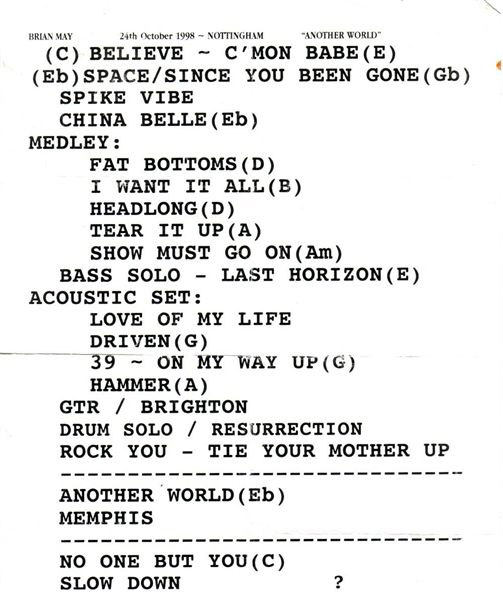 Not surprisingly it rained in Nottingham on Saturday night. Brian's first concert in England and he knew he was home! The concert kicked off at just after 8.30 pm with a blistering drum solo from Eric Singer which stopped just short of an announcement informing the full capacity crowd that Brian was running a little late and so we were all be entertained by Mr Conway from Tennesse. I think I was the only one there who was not surprised and dissapointed at this. My ten year old certainly was and it wasn't until I told her halfway through "It's only make believe" that the weird looking, gum chewing, guy performing to audience was really Brian that she 'woke up', mouth drooped in amazement, and began to get really excited. All we've had since the concert was "I was there. Brian was there. He's real!" from a still excited ten year old almost 48 hours after the concert finished! It was quite apparant that a lot of the crowd hadn't cottoned on as to who Mr Conway really was either - some fans!

The switch took place during "C'mon baby" and, from my vantage point at the right of the stage and on the balcony (I had a sideways view) I could clearly see the rest of band behind the curtain and Brian doing a strip act whilst changing into his other clothes before acquiring his guitar and climbing the steps to take his position for "Space". Folks, I got a really good view and let me tell you all that Brian is developing a little bald patch on the crown of his curly head!

The band launched straight into "Since you've been gone" to wild cheers from the crowd. Brian then said he'd take us to China and played a short piece on the guitar (not Chinese Torture) before going into "China Belle". Next came a short solo incorporating "White man" followed by 'a very old song' - "Fat bottomed Girls" with the "Gimme the prize" solo which went down very well indeed. The rest of the Queen set followed concluding with "The show must go on" in which Brian let a lady on the front row sing part of the chorus. She loved it and so did the crowd!

Brian took a break at this point and let Neil Murray take over with a Bass guitar solo. I never knew a bass guitar could make those sort of sounds, and the whole place shook and vibrated for the next few minutes. Brian came back with "Last Horizon" and then took up a chair on the tongue part of the stage to play "Love of my life". Brian introduced this as one of the most beautiful songs he has ever heard and if he didn't play it then no one would. Brian did very little singing (he obviously realised there wasn't much point as the crowd was so loud). During the solo someone shouted 'That's really beautiful Brian', and the crowd roared in agreement - the smile on Brian's face said more than a million words could ever say, especially as there appeared to be a tinge of sadness in the smile and the way he nodded his head.

Whilst the removal men adjusted the stage layout, Brian had a few words with the audience and went to shake hands with some of those on the front row. The rest of the band came on and Brian told us his story about when he bought his little guitar from the shop it made this kind of sound......, and when he got it home it made this kind of sound....., then he played "Driven by you". During the opening piece, the guitar sustained a note after Brian took his hands off it and he had to bang the guitar to stop it! Next came '39 segued into "On my way up" after which Brian introduced the band (with a short piece from Jamie who played the theme from the Richard Green Robin Hood series(1960's).

Next came a song which stumped most of the audience, the slow version of "Hammer to fall", which has to be heard to be believed. The pace quickened up but never reached the speed we all know. Weird. The band left the stage and Brian did his guitar solo. During the course of the concert Brian kept changing his guitar, so which was the original and which the copies I'm not sure. He had a lighter coloured one for the solo, who I assume that this was the guitar we all came to see and hear (well come on folks, who wants to see Brian? It's the guitar we want isn't it?) This led into Eric's Solo which included the impressive flaming drumsticks routine (What a pity there were no fireworks to go with it.), before ramming headlong into "Resurrection".

We were then witness to an even slower version of "We will rock you" which was just borderline of gaining some life. "Tie you mother down" finished off the set, but the crowd demanded more and Brian came back on his own to perform "Another World". For the first time that night we got chance to listen to Brian's voice without being drowned out by the other instruments. A blistering "All the way from Memphis" banged out as the curtain raised again and then the band took their bows and left the stage. After a few minutes of a demanding audience, Brian relented (or did he?) and came back to perform a song which he descibes as not quite having made it as a real Queen song. After the first verse and Chorus of "No one but you" the crowd quietened obviously hoping and praying that a certain Mr Taylor would come on stage, but he didn't. I hope that the Albert Hall people in London were lucky enough to get him though - that would be one experience worth seeing and having on Video tape. Brian thanked us all, said he loved us and that he will see us all soon. He certainly will - I'm going to Sheffield!

All in all a brilliant performance, although it did seem a bit patchy in places; Queen set, Acoustic set etc, but brilliant all the same. At just under two and a quarter hours long, my only concern is that the video and album releases will no doubt be edited as has so often happened in the past.

I spent an hour and a half standing in the pouring rain to meet Brian afterwards (along with about 15 other people - most didn't stay long) only to have him sneak out of another exit and avoid his loving fans. Thanks Brian. So all you people out there whom Brian did meet after the concerts, think yourself lucky - you met God!