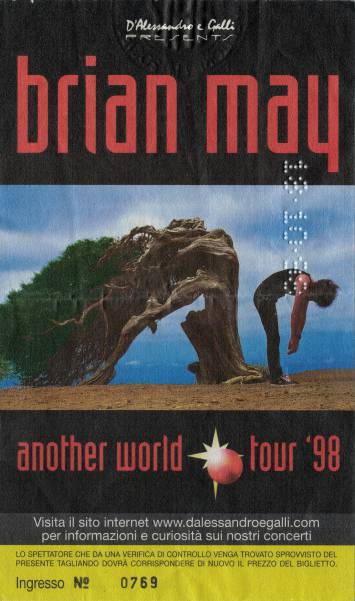 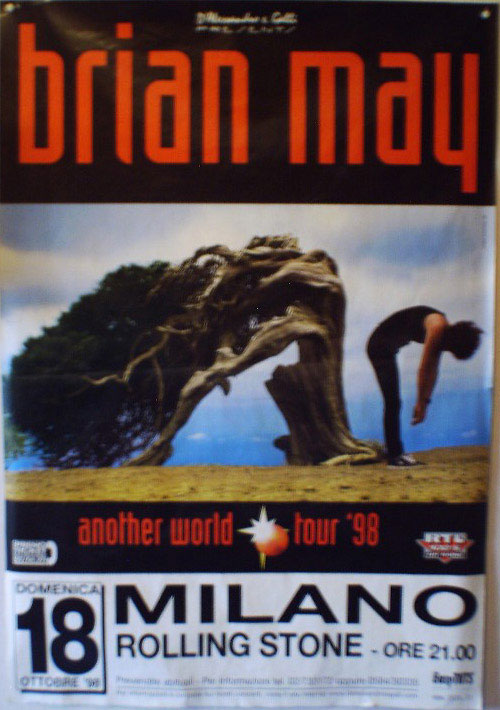 Me and some friends, including Fumihiro, who went all the long way from Japan just to see some European shows, arrived at the venue at 11:00 am. I was very surprised that there were already about 40-50 fans waiting at the entrance. At the other concerts I attended during the tour people started queuing from about 4:00 pm onwards, sometimes later. Anyway, I decided also to queue because I wanted to get to the front-row again. After endless waiting there was the entrance at about 7pm.

The show was completely sold out with a capacity of 2500 people and because of the cancelled gig in Modena, many people were searching (in vain) for a ticket before the concert.

I managed to get my usual spot at the front-row, but I already realized that this audience was totally different to the ones in Scandinavia, Germany, Austria or Hungary. They were wild and hot and everyone was standing very close to each other.

Brian's show started at about 9:00pm, and people went crazy as the curtain with the tree appeared. Flash lights everywhere. As Brian appeared on stagethere was no stop anymore for the audience. Everyone was pushing very heavily and squeezing, Arms, and elbows everywhere and T-shirts were simply thrown away.

Anyway, I think you have to be used to that, to survive in the front-row. After Since You've Been Gone I went a bit more back, where the atmosphere was still great but where I could enjoy the concert.

Brian still had voice-problems, but although the doctor didn't like it, Brian WANTED to play in Milan ("It's been a long time since I came to Italy and it is a special souvenir for you. The doctor told me I couldn't play in Milan...I said 'I must play in Milan'"), and he performed a great show together with the very best audience I have ever been in. It was fascinating, and all fans should really experience a show in Italy in the future.

The set-list was the same as in Linz, with a few differences: Spikes keyboard solo was skipped (I could write a comment about this), 39 (Intro) was played after Driven By You.

As Brian presented the band and it was time for Jamie, the audience joined in a very good improvised guitar extravaganza for about 2 mins. It was fun!

As it was time for Resurrection the Red Special somehow didn't seem to produce any sound anymore. That's why Brian went off stage and Eric directly started his great drum-solo. Afterwards the band went on stage again, and they played just the end of Resurrection.

Although the audience was unbelievable, Brian couldn't play any more encores but Another World and All The Way From Memphis because of his voice. Anyway you could really see that the whole band enjoyed this show a lot and Brian said during the set that they should consider an Italy tour next time.

It was a fab show, and in my opinion the best so far together with the one in Hamburg, where the set-list was just a little longer.

Brian and the band left the venue without signing autographs at about 11:30pm.

Unfortunately this was my last concert of Brian, but the whole tour I did was worth everything. So many new experiences and great impressions. And thanks to the other May-keteers who travelled with me to some of the shows. We had a great time! And the May-keteers will remain, with Livia seeing the tour in the UK, Alex the concerts in Russia, and Fumihiro the concerts in Japan.

Thanks Brian for a great tour!!!