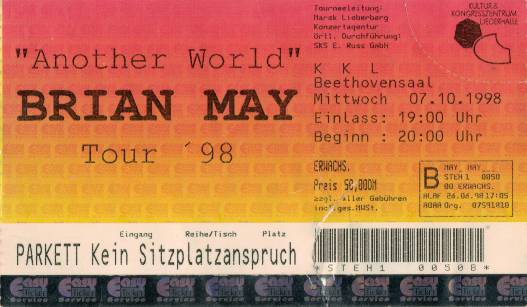 It was the first time for me to see Brian live, so forgive me if I might be a bit biased -- if anyone wants to read about *bad* things, well, I could find only two: (1) having to wait till it started (but we're used to waiting anyway, for releases etc.; and chatting a bit with the fans next to you isn't bad anyway), and (2) it rained all day long (luckily this was no open-air concert...)

Why is Brian always late? He should take the same plane/bus/car as Conway ;) -- most of the audience, it seemed, didn't know what to think of it at first (since many, probably, aren't avid internet users or collectors who have Only Make Believe, B-side of singles that aren't released here in Germany...) -- great idea anyway, especially when "Conway 2" lets Brian get ready for the immediately following opening scene, with the big colorful tree...

The set list was about the same as the others -- I'm not sure about the exact order, though - didn't take notes, rather concentrated on the event itself. Included was NOBY, he ended with All The Way From St-- erm, Memphis, and he said a few words in German, too... BTW at the beginning, the guitar technician (Steve) changed Brian's guitar after each song (seemed to puzzle him a bit), and (later, too) sometimes needed more than a quick movement to plug it in but had to wind around Brian - kinda funny... (luckily, no major problems, as reported from other gigs)

Also, it was great to hear the slow Hammer To Fall, never could imagine that before I heard it; and though the audience wasn't that big (the standing area was relatively small, instead many seats; not sold out - who's sitting down in a rock concert, anyway??? [except for physical reasons - like in a wheelchair]), that magical feeling especially during Love Of My Life was great!, also TShowMGO (Brian let a Freddie look-alike sing a line... gee, I wander what's going through Brian's mind when he sees such look-alikes......)

Okay - if I continue writing it won't be 'quick notes' anymore... and I can't write *all* my impressions&feelings here, or I'd probably still sit here tomorrow...