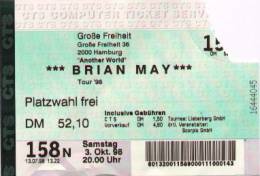 This concert was absolutely terrific!! The mood in the audience was high and Brian overwhelmed by the reception from the start. From people shouting for Twitty when 'Mr. T.E. Conway from Tennessee' was announced to people chanting for Cozy after Brian's dedication of Since You've Been Gone to the wonderful late drummer and for Freddie at the end of Love Of My Life - just in respect to the ones we lost. A very short moment of embaressment was when after Space the curtain showing the sabina tree was supposed to rise - but didn't. Brian tried to find a way through it to the front of the stage, but within seconds the technicians were there and raised it by hand. The show featured another astoundingly beautiful slow Hammer To Fall, announced as 'a song with a completely new meaning' and - as the May-keteers shouted for it - an extra 39/Let Your Heart Rule Your Head, just for the good mood. A very moving moment was when Brian started The Show Must Go On, but - still fighting a cold - came a bit out of voice and the entire crowd took over the lead singing and did amazingly well. Everybody gave his best and tried not to shout louder then the rest but just keep in tune. We were regarded with both encores again: Another World, All The Way From Memphis, No-one But You and Slow Down with a brilliant solo from Jamie. Talking about him. A constant enjoyment at every concert is to see his grinning. He most obviously has so much fun playing on stage that watching him you just get into the mood yourself.

If you wonder who the May-keteers are: a bunch of Brian nuts who follow the tour for quite a while. Founder is Oliver from Germany, the rest is young Erin from US (yes, she came over just to see Brian nearly every day for a fortnight), Alex Smirnov from Moscow (have a look at his webpage!), and from Munich on Fumihiro from Japan (yes, same as Erin) and Miklos and to friends from Hungary, as well as your humble reporter. In Hamburg again quite some people waited patiently for hours as well before as after the show, but no luck. Just the band members gave a few autographs, Brian himself would rush away into the car and drive off immediately. Nevertheless, it was a wonderful evening and to me the best concert of the three I attended up to now.

On this Saturday it was a celebration day in Germany: The Day of German Reunification! But it was not a good day, because on Saturday most people (me included) had a normal weekend and not a day without work.

Surprisingly I got a ticket to the show although I arrived very late. I was a bit disappointed that this club wasn't sold out, I could stand very comfortablz there all the time. Maybe 1000 people were there.

Then the announcer said: "Brian is late and in the meantime you can see a performance of T.E.Conway". I was angry because I thought: Who is this untalented clown Conway! I wanted to boo at him but then I saw that nearly everyone applaused him, which made me wonder. After the third song I realized that this was Brian himself. I think I was the last person in the hall to recognize him.

There's no need to describe the concert itself. IT WAS THE BEST CONCERT I HAVE EVER SEEN IN MY LIFE!

I wanted to hear Queen songs, his guitar solos, the BTTL songs and they were all great. I didn't know the AW songs. But the concert was very good and very long. I still remember that at one point they stopped the concert and pretended to look tired and looked at their watches but the crowd (including me) were so enthusiastic that they didn't go, stayed on the stage and played more AW songs in a very rocking style.

This concert was worth every D-Mark (or Euro today)! It is a pity that Brian doesn't tour anymore. This Queen and Adam Lambert thing wasn't his (and Roger's) best decision. He has enough good songs from the Queen days and solo stuff as well. He can do a solo tour with a good band as I saw that great night with the Brian May Band!