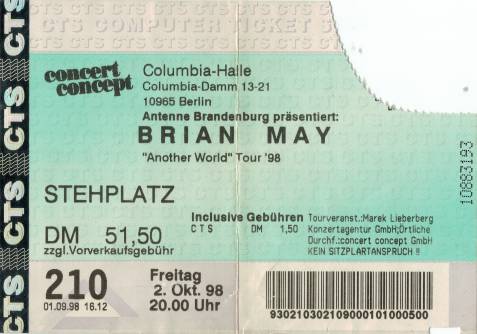 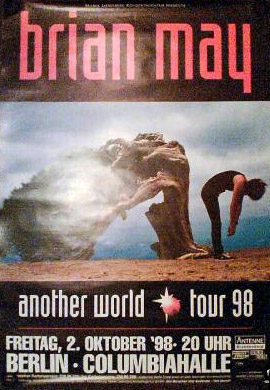 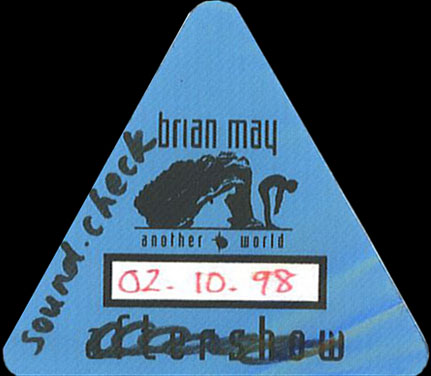 Well, the first thing we did was wait. At 5pm a small bus brought the band to the backstage entrance of Columbia Halle in Berlin (apart from Eric Singer who had been in long before).

The soundcheck started and it sounded like fun mixed with a little work. As a complete lay(wo)man in the field of music I can't tell what was going on. The band jammed a bit, there were snippets fom the songs and poor Brian suffered from a cold. After the souncheck Julie came again to pick us up. Much to my joyous surprise Brian remembered my face at once, asking something like 'We met before, didn't we?' He asked us into his "humble wardrobe" which was not very big but pretty comfy with black leather sofas and club chairs, a huge plate with fruit, bowls with nuts and all varieties of (soft) drinks in cans, on ice. Alex presented him with the Russian Fanzine and asked for a message for the Russian fans. Your humble reporter asked for a spoken message to Queen Heaven which will be coming up soon. And of course Brian was kind and friendly as always.

I could have stayed there forever (and I guess Alex, too) but as always Julie was there to make sure that the schedule was kept. Alex and me were escorted out of the wardrobe and waited in the hall for the rest of the audience to arrive.

To cut a long story short: the audience came, the support band came and went off, and finally, finally there was the moment that we all were looking for: An intro from Cozy Powell announces the appearance of the real show, but as "Mr Brian May is not here yet", a certain Mr Twitty Conway from Tennessee was sent instead to entertain the audience. Make Believe and another song, the second being a quite different Twitty. It's just finished when a well known shape appears behind the curtain which carrries the picture of the sabina tree, and that shape is bent to the other side, exactly as on the album cover. And to the music of Space slowly the show starts. I won't bore you with the same setlist for the seventh time. The mood was quite good for both the band and the audience until in the midst of Hammer To Fall Brian's guitar refused to give anymore tones. Jamie took over the guitar part for a while, but until the heavy rocky sound of the Red Special was supposed to join in - it still did not work. Brian - furious as hardly ever seen - excused the band from the audience: "We will sort this out, please, wait a few minutes." While busy technicians tried to fulfil Brian's promise the crowd entertained itself with Bo Rhap and We Will Rock You, still enjoying it all. Finally, the problem was worked out, and what the audience got for their patience, was more than worth it: A new full version of Hammer To Fall and two encores: First Another World and All The Way From Memphis, then No-one But You and Slow Down. It's no use telling over and over again how wonderful Brian is on stage.

From The Show Must Go On - sung by the crowd and reducing everyone to tears - to wonderful heavy Business and handclapping On My Way Up.