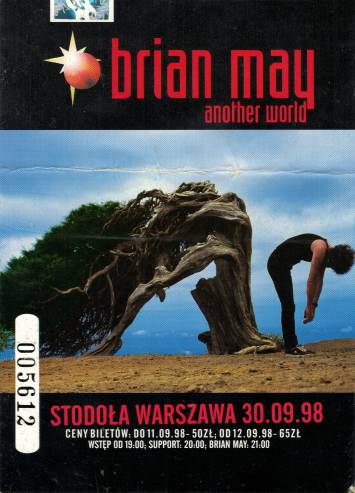 I spent several happy days in beautiful Warsaw before the concert, not least because I got engaged to my girlfriend. =) They were not bad days Queen-wise either: I heard Freddie's There Must Be More To Life Than This on radio, as well as several Queen songs played in the local Cyberia Cafe. Also I managed to purchase Rog's Electric Fire. On the day of the concert the only thing still missing were the tickets, which were supposed to be waiting for me at Stodola Club.

No-one appeared to the backstage door to sell me the tickets as was agreed. Instead I heard Brian soundchecking China Belle! :) Luckily the tickets waited for me at the front door. The final worry was how to get the camera inside, but I figured a suitable place. "There's nothing stuffed down there, it's all mine" as Freddie once said... Then we were in and after I'd bought the t-shirt and tour program we rushed forward to get good places. Stodola is not a particularly big venue and there's no seats. I still don't know who the support band were, some okay-I-guess locals who played us for 30 minutes. Then it was another waiting session as Brian's set was being put up. The guitar got the appropriate applaud of course. :)

Just a couple of minutes past 21:00 the lights went out. A huge cheer welcomed Brian on stage, but what followed was Twitty Conway performing Only Make Believe. I thought it was Brian, but after the song was over we could see both Twitty posing and Brian leaning towards the ground in the setup scene, in the style of Another World album cover. The haunting vocals of Space followed and then the band blasted into Since You've Been Gone. At that point I was having a really hard time in the midst of all the crazy jumpers (especially their elbows). Afterwards Brian dedicated the song to Cozy.

So far so good, but now started the problems. Brian's guitar was having a bad day, and he had to fix it on stage with the sound engineers. In the meantime Spike did a few plim-ploms with his synth to try and keep us warm. Brian came back to "tell some stories" and told us about having met Bill Clinton the other day. Bill of course had said that "Brian, next time you tour Poland, and especially next time you're playing Warsaw, please dedicate a song to me". Obviously, he then dedicated Business to Bill Clinton, but after this introduction Brian again went away to get the guitar right.

Finally they managed to actually play Business (or "It's A Hard Business" as Brian introduced it). The contrast between the heavy and the quieter parts ("I've got nothing and no-one in my life...") were emphasized, perhaps even overemphasized. I thought t he guitar still sounded a bit wierd and after Business Brian indeed went away to fiddle with the guitar again. Nothing good seemed to come out of it all, and Spike had to try his best making silly noises with the keyboard, I guess this could be entitled "keyboard solo".

At that point this all was getting increasingly embarrassing as Brian still stayed away. The saviour was found in Jamie Moses: he took charge and together with the rest of the band they performed a fittingly lengthy version of a bluesy number called Hoochie Koochie Man (done by eg. Jimi Hendrix). This was just amazingly superb version - Jamie sang and his voice suited the song perfectly! Brian was still absent.

It was clear that plans had now changed in a major way. Brian came on stage without his instrument and told us that the guitar problem was still being fixed and that he would do some singing now instead. Brian went on to perform Another World, a beautiful version that worked quite nicely on stage, with Brian just walking around and singing. Then Brian informed that "we'll carry on with our accoustic set" and soon we noticed we were singing Love Of My Life from the bottoms of our hearts. The audience sang really loud and Brian seemed genuinely surprised and said "that's it - you're the live album!" Now, there were indeed microphones hanging from the ceiling... :)

The acoustic set continued with Driven By You and On My Way Up, and then it was turn for rocking China Belle, introduced by twiddly-twiddle from Chinese Torture. The guitar (if it was the same one anymore) seemed to work quite "all right" now. :) Queen medley started with the intro guitar riff from Headlong, suddenly changing to Fat Bottomed Girls which was a real treat! I Want It All was not a bit less and before that one ended, they did Headlong, and Tear It Up. The Show Must Go On ended this Queen section, and now it was turn for Neil Murray. He played some impressing stuff with his bass, including the intro to the Black Sabbath track When Death Calls (Brian plays on that track on the Sabbath album).

Next it was again Brian, creating a euphoric atmosphere with Last Horizon. The slow version of Hammer To Fall followed, it was ended with a short section of the usual fast version. After this Brian was left alone with his guitar and he did The Famous Solo which was truly amazing and a way too short. I think it only lasted for a few minutes, when I was expecting something closer to 10 mins. Perhaps Brian was still not totally happy with the guitar... anyway, Resurrection was next and the house was really rocking. In the midst of the song Eric Singer made a fantastic drum solo, culminating with the act with flaming drumsticks - what a sight!!! We Will Rock You was the normal version, though I really waited for the fast version, which is one the highlights of Live At The Brixton for me. The concert "ended" with Tie Your Mother Down, and the band then returned to play two more songs, No-One But You (Brian just singing) and All The Way From Memphis. Then it was time for the kind words from Brian and the promises of returning to Warsaw soon. The show had lasted for more than two hours. We were tired to death and headed towards the door - no, towards a cold drink!

My original plan was to go to backstage to wait for Brian, but the backstage door area in Stodola is not particularly tempting and so I (to my surprise) decided to just trash the idea and went back to hotel, tired and with headache but satisfied and happy ! :)

All in all, the show was great and I'll go happily see Brian again next time I get the chance. The guitar problems caused much fuss, and they also affected the structure of the show seriously: at the start there were now only two fast rockers to warm the audience up, and even they had *long* gaps in between. So the quiet/acoustic session came way too soon. I'm sure it must have been annoying for Brian too. Well you can't get everything I guess, but at least we got Hoochie Koochie Man!!! :)