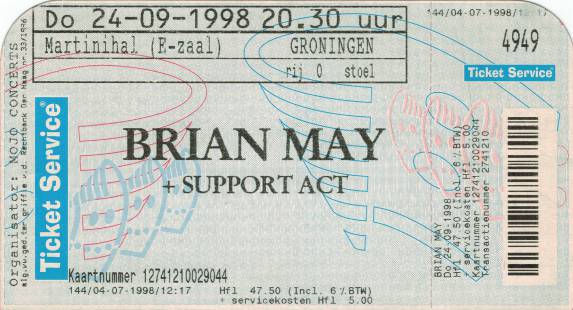 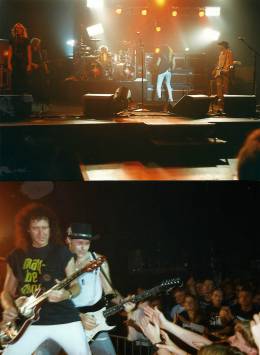 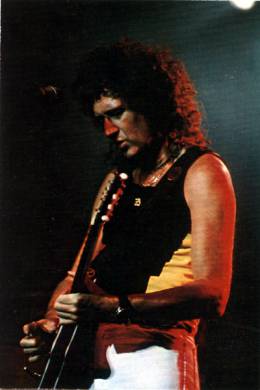 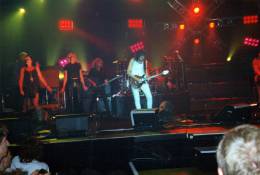 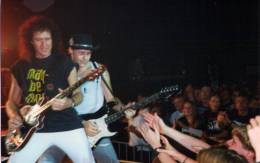 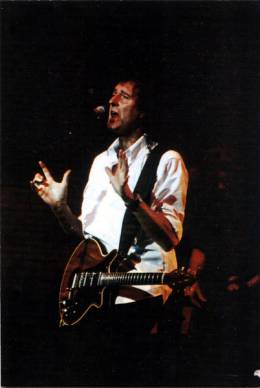 During my study construction-engineering in Groningen I travelled with a city bus about 15 minutes from bus station to college. During this trip I saw Brian May announced in the Martini Hal on September 24th 1998. Instead of jumping for joy, I started to doubt: "Should I go? What if that concert would be a real disappointment? What if...?" Just the day before the concert I decided I really wanted to go, just because I never saw a Queen concert for real and this would probably the closest I could get. So I got tickets and my boyfriend Matthijs & I went on that Thursday night (he had to go to work the next morning at 7.15 a.m. and I had to take the bus to Groningen at 7.10!). It turned out to be the best day in my life (until the birth of our daughter on February 14th 2002).

The days after the concert I felt like I had seen God, I was very impressed. There are a few things I remember well from that concert:

- Brian took an acoustic guitar and I thought: "Oh! He's going to play '39!", because 'till then he had played his own songs. But he started to play "Love of my life". I felt so emotional that there were tears in my eyes, when the people around me and myself sang "ooh yeah yeah" just like on the Live Killers album. On the recordings of the concert you can't hear it... but it was there...

- During the concert there was some guy very close to the stage who had made a fake guitar. He was waving really annoying with it, he wanted Brian May to take it. At last Brian did take it and threw the thing behind his back, he was really angry and said: "You pissed me off!", but I still don't know why he was so angry. Maybe that guy was bothering the people next to him? I don't know...

- At one time Brian started to play Sleeping on the Sidewalk, and I really love that song. In front of us sat two men and a woman who had been yelling and singing loud the whole time, just like they wanted to show how many songs they knew, how such huge fans they were. But when Brian started with Sleeping on the Sidewalk, they were quiet, just like they almost didn't know the song. And at that moment it felt really good that I could sing along the complete song without feeling the need to scream and shout and that the people who wanted to show off or so were mute.

Anyway... the days after I was in a daze, I guess. It was just magic to me. I hope I ever get the chance again to see a concert (I found out about the Koninginnedagconcert when it was on TV).

Although rumours were that only 1200 of 2400 tickets were sold, I later heard that 1900 was the latest number. When we after hours of waiting got our position on the front row, the hall slowly filled and not much place was left, luckely the hall was almost sold out at the end!

The hall in Groningen (Martini-hall, e-hall) is not deep and very wide, it's a flat staight on hall, not the same at all as the bowl-shaped hall in Utrecht.

Again "Billy The Kid" was the support act, we had heard the songs already the 1st evening so, we were NOT interested in them! :-)

The intro and setlist of that evening was almost the same as in Utrecht, except for "Sleeping on the Sidewalk" which was added to the set. I had never heard this song live before, and it was GREAT!!

Brian was quite relaxed and made many jokes and was fooling around sometimes. He for instance showed us the little arcoustic quitar he uses in the set. He played a few acoustic things and than said, "you can do also this...", then he activated the same effects he uses for his Red Special guitar and suddenly this small wooden guitar sounded like an electric one, with lots of sustain and distortion!!! WOW!

And he looked strangely at his little guitar like "heh? what's this???", FUNNY!!!

On both concerts he tried a few words in Dutch, but seemed not to come further than: gggggggooden-fuckin'-avond!!!! Of course acted, but funny anyway! :-) He also said after "sleeping on the sidewalk" : `I guess there are a lot of fans out there who sure hope that some of you are bootlegging this...'

Funny thing at the 2nd concert was that the "Twitty Conway" look-a-like came on stage and danced TOGETHER with Brian during the last song, so everybody knew by then that there was indeed a double at the beginning of the gig!

At the first concert, the full colour tour t-shirts with tourdates on the back were sold out, but this time I got one! Also I bought a watch, badge, polo-shirt,another t-shirt, tourbook and mini-t-shirt, sorry, but I had saved some money for this! :-)))

I am glad to have been to both concerts, they were different and, added together, were a great experience, I surely hope that Brian comes here again soon!