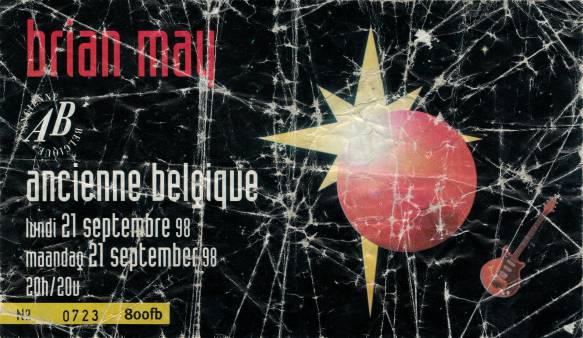 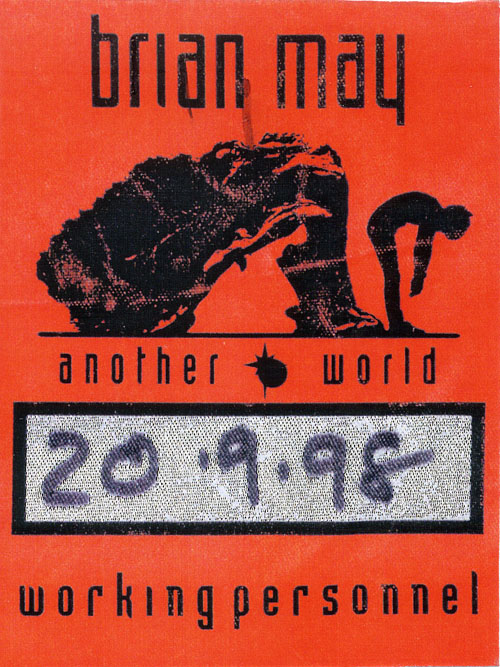 I had the most fabulous week attending the four gigs from Brussels to Groningen. And I'm so glad I did it!! Because if I'd only gone to one show, it would have been Brussels. The shows were all fantastic, but I would rank them Paris #1, Utrecht #2, Groningen #3, and Brussels #4.

Brian really rocks! I saw him on tour in the States--in Cleveland the first time around and on his second pass, in Chicago and Detroit. Chicago was the best of the gigs I saw, Brian's singing and stage presence having grown tremendously between the two legs of the tour. Now he's done it again! His rapport with the crowd is a supercharged glow. The gig hurtles along from rock and to ballad, from blues to rock-a-billy until the two hours are gone, all too soon, in a flash of sound and cheers and a grin and a wave from Brian. What a pleasure to see and hear him and his band again!

Brussels was great. By chance, in Utrecht a Dutch friend wrote directions to his apartment on the back of what seems to be an original set list of the Brussels gig. Here it is, in band jargon:

First to appear on the scene, in front of the curtain, was a special guest come all the way from Tennessee - Mr. T. C. Conway! He has an authentic Tennessee twang and is obviously enjoying himself on this tour. What a character! Toward the end of his appearance, he was replaced by a double and soon Brian appeared on the other side of the stage behind a scrim with the famous tree on it in dayglo colors. And the crowd went wild!! The show was on!!

Very early on in the concert - the first time Brian paused to speak to the crowd, someone up front yelled, "Tie Your Mother Down!" Without hesitation, Brian said, aside, "Later, darling", exactly as Freddie would have, and went on with what he was saying. Made me smile.

I chose to sit in the balcony, since I'm only 5 feet tall and can't see a thing when I'm in the crush on the floor. On one side of me was a young professional now living in Brussels, and on the other was a police official from a neighboring city with his teenage son. None of the three were familiar with Brian's music. The police official had seen Queen at Forest National in 1986. During the concert, at different times, each of them turned to me and said, "He's very warm with the crowd isn't he?", and "He's very sympa, isn't he?" I thought that was pretty amazing. While they were obviously enjoying his music, they warmed to the man, too.

The reason the Brussels show ranks last on my list was that most of the audience were not die-hard Brian fans and they had no idea what T. C. Conway was about. They were polite but clearly confused. They had come for rock, not some weird dude in a crazy outfit. They were further bewildered when Brian appeared as himself and launched into a Rainbow song. As it was, the crowd didn't really get into the groove until the Queen medley.

Sunday the 20th me and my wife was in Brussels to see Brian May live. I missed him when he was supposed to have played in Copenhagen on his last tour (the concert was cancelled (I still don't know why)), but this time I wanted to hear him. The trip was a carride for 1200 km's from Denmark to Brussels, but I would gladly do that to hear Brian.

The Ancienne Belgique was just the perfect place to have the concert. It is not too big, but there are seats everywhere! There is a big floor, 10-15 rows of seats in the back and balconies on both sides. I don't think it was sold out (the top balconies was not used), but the room seemed crowded anyway.

I have read a lot of other reviews, and I am amazed that people remember the setlist so well (taking notes, I guess. I could not concentrate on that with Brian so near :). I cannot remember exactly which songs were played, but as I remember it the set-list sounds pretty much like all the other concerts except that there was no Sleeping on the Sidewalk and no ABBA-songs :) I cannot remember the he played any unique songs only for Brussels, but I might be mistaken...

It was great to hear Brian, but the Belgians puzzled me. It is almost as if they were Queen-fans that had come to the concert without knowing much of Brian's solo stuff. When he played the Queen medley (Fat Bottomed Girls etc.) and other of his Queen songs everybody jumped and clapped, but when he played his solo stuff most of the people stood still and listened (even during "All the Way to Memphis", and I for one could not stand still there). I would LOVE to hear many more Mott songs by Brian... Maybe a complete album of Mott-covers :)

The highlights of the concert was to me to hear "China Belle" and "All the Way to Memphis" live, but all in all it was great just to see HIM so closely. Last time I saw Brian was in 1986 also in Brussels where he played with three other guys whose names I cannot remember at the moment :):) Then it was at a much larger venue (Foret Nationale), and they were oh so far away from me...

Another highlight of the concert was the drummer Eric Singer. His solo was a masterpiece and during the whole concert he was always active one way or another (in the beginning of the concert Brian had to signal him to be quiet when he was singing a silent tune and Eric was drumming the beat). All through the concert Eric really looked as if he enjoyed playing.

My sister was with us to hear the concert. She has never been a Queen-fan (for you Swedes I can tell you that she used to listen to Harpo (ABBA'ish pop-music for you non-Swedes) in our younger days), but afterwards she said that it was a good concert (and I believe that she meant it). She also said that she was amazed at how much Brian May sounded like Queen - in the sense that she had always connected Queen with Freddie, but now she had became aware that Brian May was a HUGE part of the Queen-sound...

On a final note: Before Brian played "No One But You" he said that he was going to sing "the only Queen-song that had never been played by Queen". You can interpret this as you like...