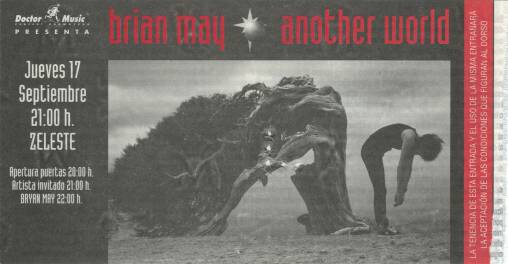 After seeing Queen long long time ago and Brian supporting Guns I went to Barcelona to see Brian one more time. The concert was in the Sala Zeleste. But one friend of mine told me that Brian was in Le Meridian hotel near to the Ramblas. So I decided to wait for him there. All the members of the band went out to the street several times but never Brian. Finally - and 6 hours later - Brian appeared at last with a red jacket and a CD in his hand. He signed the ticket for me and 5 minutes later he and the band got into a minibus a left.

Before the concert, some surprises had been announced, and rumours of a Roger appearance began, but it didn't happen. Anyway the concert was amazing!! The concert started with Brian dressed as a rockabilly, singing a 50's song called "Only Make Believe" (now available on his latest UK single "Why Don't We Try Again" and on his forthcoming Europe one "Another World"). After that, a man dressed identical to him appears on stage rejoining the dance that Brian left. In the background there is a huge picture of the Another World album cover. The lights turn off, and Brian then pose like in the photo.

Then Space begins to sound, and it's followed by Since You've Been Gone, and then by Business. After that, Brian announces that some Queen classics will be performed, and then the Fat Bottomed Girls riffs begin. Then he performs a wild version of Tear It Up, followed by Headlong and I Want It All.

The backing vocals singers are not the same like in Brian's previous tour. These have much less participation that the others.

Then he played Love Of My Life, and after that an acoustic version of Driven By You. Later, a slow, acoustic, and extremely beautiful Hammer To Fall.

After No-One But You, he played "Otro Lugar" (Another Place) (aka Another World), a Spanish version of the last album track, specially translated for his three shows in Spain.

The show finished with "All The Way From Memphis".

There were some technical problems, a few failures on his solos, and in two opportunities Brian went out of tune, but apart from this it was an amazing, incredible, great, excellent and unforgettable night!!