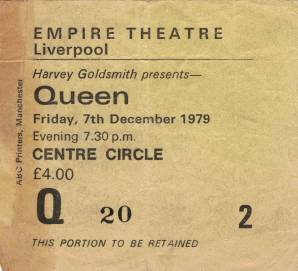 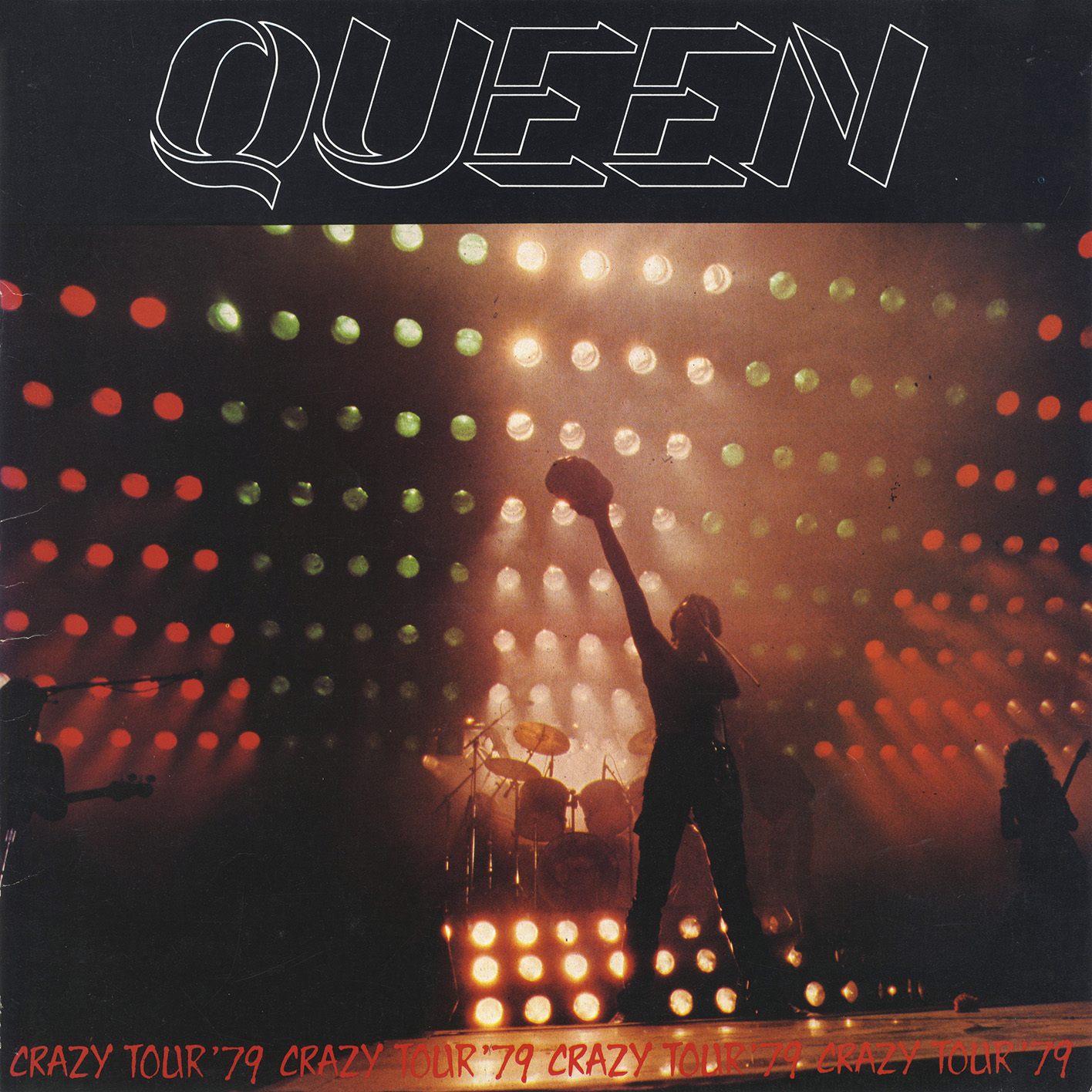 I was fortunate to see Queen make their debut on T.O.T.P. in early 74. This was the time that Glam rock was at its peak, as a 10 year old I used to enjoy watching the likes of Mud, Slade, Sweet and Gary Glitter. I had never heard of Queen before seeing them on T.O.T.P, from that appearance I was hooked! The sound and visual image of the band took my appreciation of music to a level which was far ahead of the other acts that i used to enjoy. The song that they performed, Seven Seas Of Rhye, has stood the test of time so well over the last 29 years. For the next 5 years I would always listen out for a new Queen single release hoping that i could see the band perform the single on the TV.

A couple of months after my 15th birthday I had the opportunity to see the band play live in Liverpool on the Crazy tour. It was to be an early Christmas present off my parents and they were taking me to the concert 80 miles away from my home town with another Queen fan called Elizabeth (good name for a Queen fan!). To say I couldnt wait was an understatment! Just over a week before the gig I went down with chicken pox, my Mother said "You can't go to the concert as you might give it to Freddie!", but, it was going to take more than chicken pox to stop me seeing the band for the first time!

The concert took place on a Friday, I remember being in school and a couple of mates being almost as excited for me as i was for myself, as i was always telling them how much i loved Queen!

We had excellent seats, in the 4th row, on Brian's side. There was no support band, so, when the lights of the theatre where dimmed you can imagine the atmosphere in there, a cloud of dry ice slowly wafted into the audience with the intro tape playing, I'm shaking my head typing this as I can remember it so well, just goes to show that you never forget your first one! This is what I had been waiting for, for so long, the opportunity of seeing Queen live, I had heard so many times of what a great live show they would perform, before this I had only seen their Christmas eve gig on the TV in 75. I hadn't even heard a bootleg tape before I purchased Live Killers, an album that I couldn't wait to buy, and played to death in my bedroom in the summer of 79!

The lighting rig was suspended about 6 ft high above the stage, this was slowly raised to reveal the hundreds of white, green and red lights piercing through the dry-ice and into the noisy, excited crowd, an explosion was the cue for the band to enter the stage, they ripped into Jailhouse rock, with the customary, as I was to learn, always, last on stage appearance of Freddie. There he was about 10 ft away from me, unbeliavable, first impressions? He was smaller than what I thought, on the TV he seemed to give off the appearance he was a lot bigger, or was that just the way his stage presence came over on TV? He was dressed in all black leather, including the hat, and the "fly" eye shades. Not to displease any of the city's football fans in the audience Brian later revealed that was the reason, why Freddie was wearing blue and red kneepads!

The set list was similar to Live Killers, but included Save Me which wasn't to be released as a single until the next month. The majority of people reading this will have seen Queen in concert, so you know how brilliant a Queen gig was. With the glorious benefit of hindsight I was fortunate that I had such a great seat to see the band in action for my first time. A year later and my first gig could have been at the back of the N.E.C. in Birmingham.

All too soon the gig finished, on leaving the theatre O noticed that my ears where ringing from the volume of the concert, the ringing didnt stop until the next Tuesday!

December 91, two weeks after Freddie has passed away and I'm back at The Empire for the first time since my first Queen gig, of all the places to go back to... I explained to my partner that it was a gig I wanted to miss as it would be too painful to visit the Theatre in the circumstances, she talked me around, so I took my seat in the circle to see the gig by Paul Young, who I had seen before, and to this day I still like.

Whilst the support act was on, I looked down into the stalls, from the right of the theatre I looked at the 4th row and counted the seats until I got to the 12th seat, the seat I had for my first Queen gig, the memories came flooding back of that night, my throat was choked as I took a journey on the gigs that I had seen after I had been in that seat - 3 trips to Paris, 2 to Brussels, Cologne, Hot Space tour, attending the 7 gigs in the U.K. on The Works tour, down the front at the Live Aid gig, The Magic tour, every opportunity I had to see the band in action I took, they would never happen again, being a Queen fan you can probably realise how I was hurting at that time?

A couple of years later Brian performed in Liverpool at The Royal Court Theatre, just down the road from The Empire, I was made up that he was playing in Liverpool as this was a chance to see Brian's first visit to Liverpool since my first concert in 79. It was a great concert with a brilliant atmosphere. On Brian's next tour 5 years later I was fortunate to meet him, and he signed a photo of a picture I had taken from his gig in Liverpool in '93. On telling him of the gig it was taken at, he commented on what a great night that had been, and how he was disappointed he couldn't book the venue on the tour he was on.

The Brian gig in Liverpool was just what I needed after my return to The Empire, perhaps I am asking for too much, but, it would be great to see Brian perform sometime at The Empire! If your ticket for the gig is Row D, Seat 12, after reading this you can understand why I would want to swap tickets with you?!

We set off for Manchester early Saturday morning one day in September 1979. I had to bribe my brother in-law(not a Queen fan) with the promise of a ticket and petrol money as I couldn't drive at the time. We arrived at Manchester Apollo before opening hours but found to my horror that they'd already been open an hour. We got to within sight of the ticket office and the inevitable happened - the sold out sign came out.

Two long months later, concert day at last. I had a stomach like a child on Christmas Eve. I had a few cans on the way (Tartan bitter, remember them?) When we parked up I was physically sick due to the excitement of course(nothing to do with beer, honest). After a bit of banter in the queue we finally got to our seats. We weren't near the front but with it being a theatre we were never going to be that far from the stage.

The lights dimmed, there was dry ice everywhere, the pizza oven began to rise, then Queen exploded on to the stage singing We Will Rock You. The crowd rose as one everybody jumping up and down like demented animals. We had a burst of Millionaire Waltz, Brian playing piano on Save Me. The crowd kept on singing Crazy Little Thing Called Love long after the music had finished and Freddie doing the dance he did in the video. I remember singing Love Of My Life the whole way through with the crowd as Freddie listened, then singing it all again with him. Roger's big drums, Brian's guitar solo, then Freddie and the boys whipping the crowd into another frenzy with Bohemian Rhapsody, Sheer Heart Attack and Tie Your Mother Down. Then Freddie on the shoulders of Superman singing We Will Rock You and then the song to end all concerts - We Are The Champions.

As that was my first Queen concert, it was a very special one for me. I was lucky enough to see them six times and I can say "hand on heart" every show was a different experience. I think some of you will know what I mean.

I'm no writer(as you can probably tell) so I hope this all makes sense to you and I hope you got a little bit of the excitement and emotion I had in 1979.