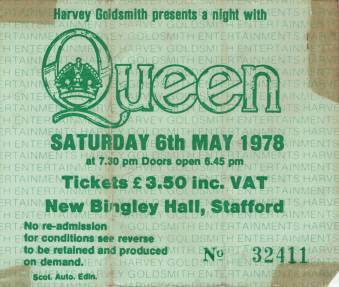 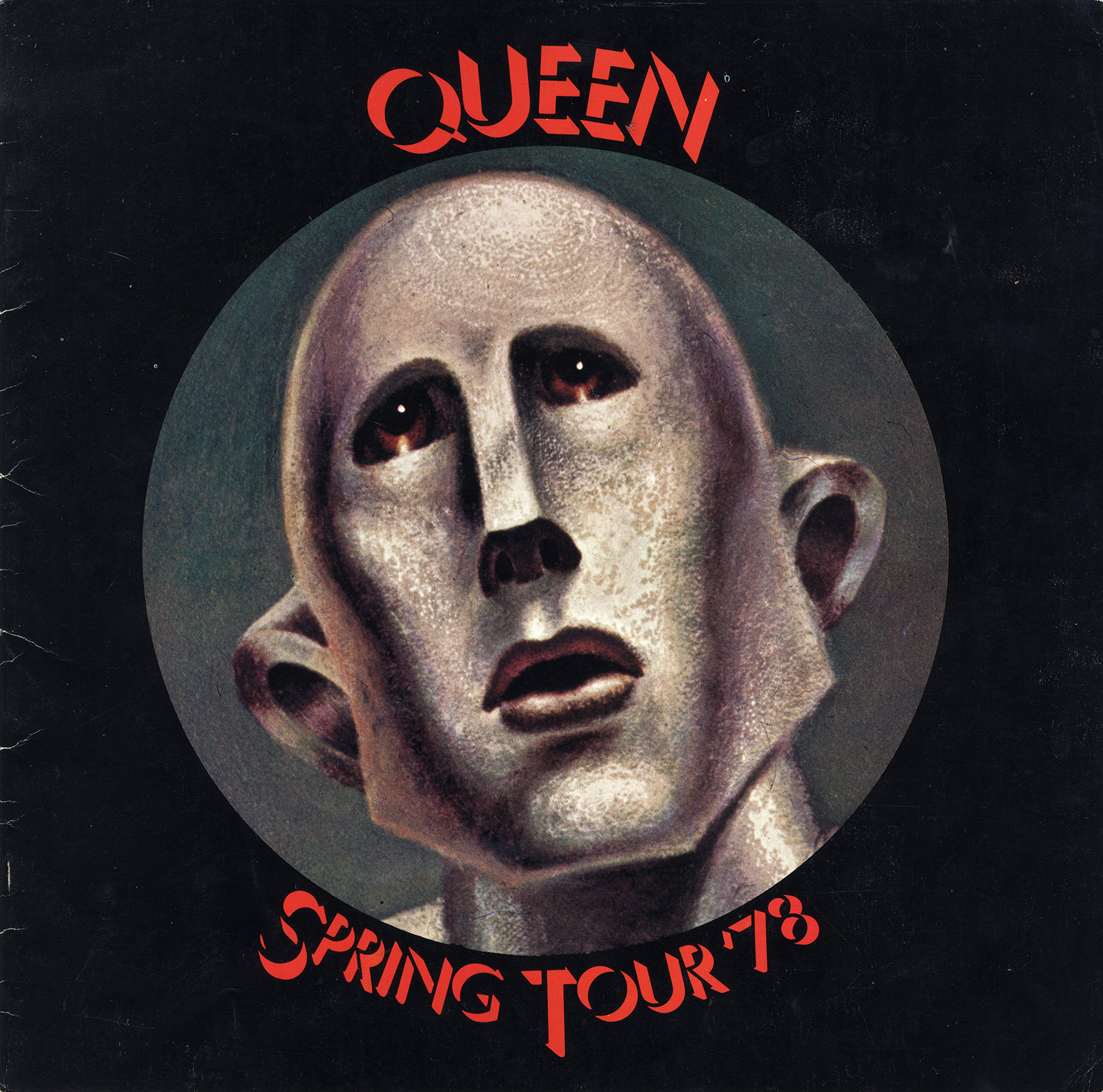 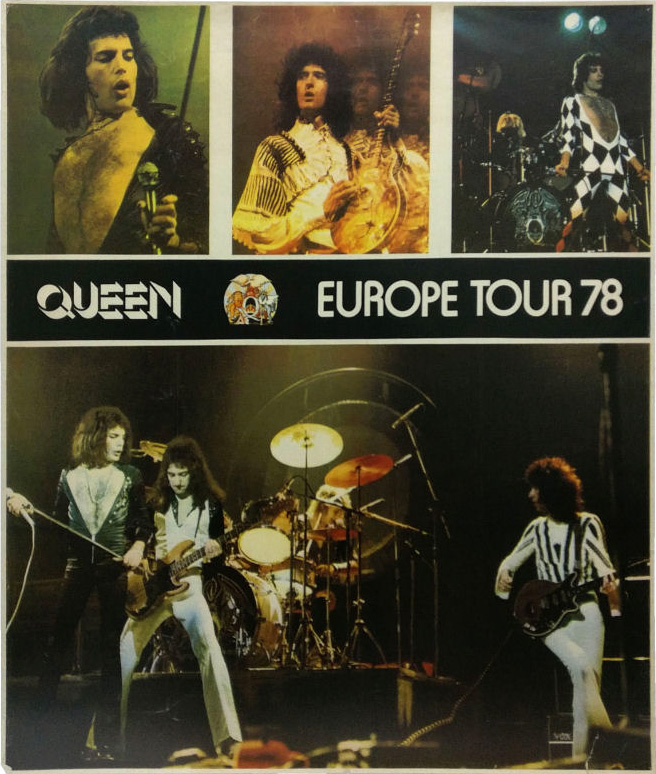 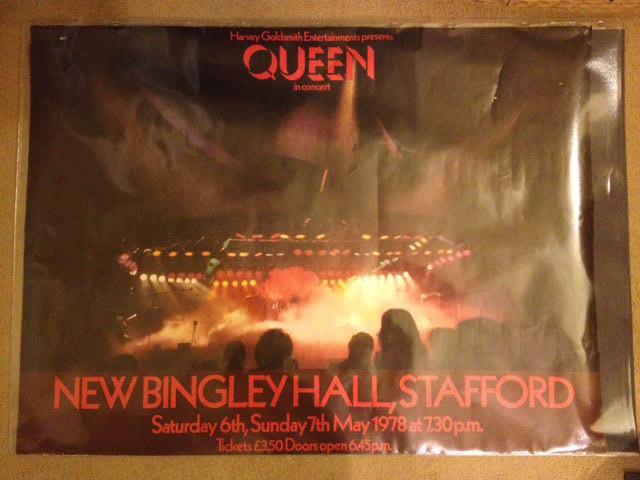 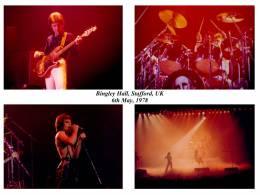 As I write this I can't believe it is over 24 years since my first ever Queen gig. I was 15 years old and had looked forward to this day ever since I had first heard Bohemian Rhapsody 3 years earlier. Before that song Queen had just been another pop/rock group but BoRhap was the song which for me would set them apart from all others, the song that began my addiction for this band's music - an addiction which continues to this day.

I had an hour long bus ride to Stafford and then had to walk to the Bingley Hall which was about 2 miles out of town. I remember while walking a couple of stretched limos passed I couldn't see inside because the windows were blacked out but I knew that it was the members of Queen in those cars and that added to the excitement. I arrived at the venue and joined the queue to get in. I was quite early but there were still a few hundred people in front of me. I bought a Black T shirt with the News of The World robot on the front and the words Spring Tour '78 and a program, both of which I still have although the T shirt is well worn. I was also treated to a young lady a bit drunk I think, taking her T Shirt off and running around half naked, quite sensational for a 15 year old lad.

We were let into the hall at about 7pm and I found myself fairly near the front it was all standing and I was quite small so I was pleased to see the stage was set quite high which meant I would have an excellent view. The stage set for this tour was the famous crown and as I looked in awe at its size. I can remember wondering how they would get it to lift off the stage?

I can't remember the time but probably an hour or so after I had got into the hall the lights went out and a mechanical whining noise started this was followed very quickly by white lights from the stage, smoke and then the drum beat of We Will Rock You with the song breaking straight into the chorus. Suddenly on a platform in the middle of the front row of the crowd Brian May appeared playing the "Rock You" guitar riff. I remember the feeling of joy and awe, I am sure I must have pinched myself to make sure this was really happening. After an explosion they burst into the fast version of "Rock You" and I saw Freddie for the first time. He was wearing shiney leather trousers, jacket & cap and running around the stage like a madman.

It's far too long ago for me to remember every detail of the show but I do remember Freddie toasting us with champagne and at the end of '39 Roger threw his tamborine into the crowd and I had it for a split second before dropping it, I stood no chance really. The songs which I remember most from this gig were the ones which after this tour they were never to play live again: "White Man" & "Prophets Song" both were played either side of Brian's guitar solo and I can clearly remember Freddie performing vocal gymnastics during the middle section of "Prophets Song". The concert ended with a Rock n Roll medley. I remember right at the end of God Save The Queen we all started singing "You'll Never Walk Alone", then the lights were on and it was over. In a lot of respects it seems so long ago but as I am thinking of it now, parts of it are as clear as yesterday.

It was fun reading Kevin's story about going to see Queen at Stafford Bingley Hall in 1978. This was the first concert I had ever been to (talk about starting at the top). When the lights went down and Brian started with the dynamic We Will Rock You strumming, I was captured. A couple of years ealier I had purchased Night At The Opera for a girl I fancied at work. I took it to give her and before I could present her with it she showed me that she had just brought the album herself. So much for my Night At The Opera with her! So, I had to go home, take a cold shower, and listen to music. Because it was the only album I had, I played it and played it and I discovered a world I never knew existed. Music up to that point was something that was on the radio. That night seemed to open a new and exciting world me. Not as exciting as I had been planning with her but exciting none the less.

My biggest memory of the Stafford concert was when Freddie gets us to sing along with him. Whenever I heard the Live Killers album, it would take me back to that moment at Stafford when I found out what I wanted to do with my life. I write now, plays and musicals, some successful, some not. Thanks Queen for my reason to live.

Memory's a funny thing... and I wish to heck that I had a better one. How come I can remember useless things I don't want to know, like the winner of the first Big Brother programme, but can't remember stuff which would be far more useful... like how to order beer in any language, my bank account number... or the exact setlist of my first ever rock concert, Queen at Stafford's Bingley Hall in May 1978?

Sitting down to type up this review I did a quick search on the net but only came up with a partial setlist which ends about two thirds of the way through. Very frustrating. So really this isn't a review, it can't be, but it's more a hazy recollection of just what it felt like to be a 15-year-old boy at his very first rock show.

First off I remember getting the ticket. "Harvey Goldsmith presents A Night With Queen" printed in green (tickets for the Sunday night gig were printed in blue) and the price, L3.50 - laughably cheap now. I can't remember how long it was before the gig that I got the ticket but I do know that the waiting for the day of the gig was unbearable. But eventually that day arrived.

Another reason it sticks in my mind is that it was the day of the FA Cup final (Arsenal beat Ipswich Town) and it was the first time I'd not sat glued to the TV from 12pm for all the build-up and the big match itself. If it had been my team, Manchester City, it might have been a different story, but I went up to Bingley Hall mid-afternoon, with a friend called Mark Butters, to join the queue and get as good a standing spot as possible.

For those of you who don't know, Bingley Hall is a 10,000-plus capacity shed (a giant cowshed, really), at the County Showground just outside Stafford, and owned by the Staffordshire Agricultural Society. Before the NEC and other purpose-built venues came along, gigs at this venue (which on other occasions were filled with agricultural displays or animal pens) were a big deal, on a par with Wembley Arena and the like. Others to have played there include Abba, Black Sabbath, Genesis, Thin Lizzy, Saxon, Yes and Rush.

I remember my Mum being worried sick about me going to the gig. Worried about the size of the crowd. Worried about the music volume. Worried about drugs. She was particularly worried that I was wearing a Thin Lizzy badge on my denim jacket and might get beaten up by some aggressive Queen fan who took exception to any other band. I had to persuade her that rock fans were not quite so tribal as football fans.

I also remember standing fairly close to the glass-fronted doors in the queue and the physical, painful ache of anticipation. What came next is a blur - the doors finally being opened, the crush as we made our way through and our tickets were examined, the further crush by the merchandise stall (I got myself a big, square programme, which I've still got).

Then I made my way into the crowd, jockeying for a position as near to the front as possible. The gig was all-standing and as showtime got closer the build-up of pressure was astonishing. I was pretty central, but there was constant swaying from left to right, if you lifted your legs you wouldn't fall, just be carried along with this sea of rock fans.

Finally the wait is over (yes, I know I've changed tense, it just suits my recollections better). The lights go down. The roar of the crowd is unbelievably loud. But what comes next is even louder. As we strain to see what's going on the air is filled with a mechanical sound, the giant lighting rig (Queen's famed crown set-up) is lifting into the air in a sea of smoke. We Will Rock You explodes into the air. It's all light and smoke and noise... and suddenly there's Brian May, playing that guitar, just feet away from me. The spotlights fall on John Deacon and Roger Taylor behind his gigantic drumkit.

Just one thing left now. Freddie. And he appears out of nowhere, Freddie Mercury, prancing and preening around the stage, soaking up the adulation, singing his guts out, clad in shiny black PVC. Call me innocent or naive, but back then I didn't really know about the whole gay/camp fetish thing... he just looked like the superstar he was.

For the next two hours or so I am transported to a whole new place. We get the rockers (Brighton Rock, We Are The Champions, Now I'm Here, a pre-release It's Late, I'm In Love With My Car), the pop-orientated stuff (Killer Queen, Spread Your Wings, Somebody To Love, You're My Best Friend) and a superb acoustic section, featuring Love Of My Life and its amazing crowd singalong and '39, during which a string breaks on Brian May's guitar but he carries on regardless, note perfect to my ears.

Oh, and we get Bohemian Rhapsody too. It's still only a couple of years old at this point, and although obviously something incredibly special is still making it's way up the ladder to immortality to stand alongside the likes of Stairway To Heaven. Anyway, it's bloody brilliant. Queen leave the stage for the opera section, enabling them to make another grand entrance in lights, smoke and pyrotechnics for the rock-out - a masterstroke!

According to Kevin Ruscoe's review of this gig at the superb www.queenconcerts.com site we also got White Man and The Prophet's Song, but I have no recollection of that at all. Nonetheless it still sticks in my mind as one of the greatest gigs I have even seen over the past 28 years, and as one of the greatest events of my life. Like Kevin, I remember singing You'll Never Walk Alone at the end of God Save The Queen, a football terrace salute to a rock phenomenon. What a night!