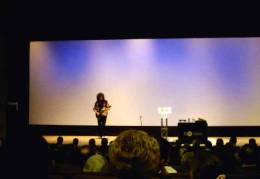 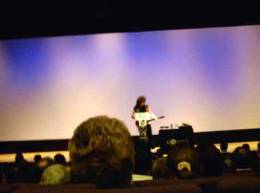 On 9th January 2004 Brian should held a short speech at 8 pm in the Auditorium of the University of Hertfordshire [the same University where Brian did get his Honorary Doctorate in 2002]. A few days before that some tickets were auctioned on ebay, it was mentioned that this event was sold out (actually it wasn't) and that Brian will not only held a speech and do a question & answer session but even should do a little acoustic set... but on brianmay.com stood that Brian won't do an acoustic set. I was confused what would really going on in this University but it didn't really matter if Brian should "only" held a short speech or he would even do an acoustic set there, I just thought I HAVE to be there.

After quite a long journey (...) I arrived at about 4 pm at my hotel, and then looking round for the right tube/bus connection (it was much harder than I thought it would be ;-)) to the University. At about 6 pm we were at the University of Herts. At this time there were no other Queen-Fans/Brian Mayniacs around but a few minutes later another one came and more and more - Jen and Frank Tunney were there too... Someone told us that Brian's speech will last about 45 minutes and he will indeed play an acoustic set - there was also a soundcheck, so, it was sure he will play something... At about 7:25 pm Brian arrived with no bodyguards (only his chauffeur), we asked Brian for an autograph and, well, we got one, Brian then went inside the Auditorium... Punctually at 8 pm the doors of the Auditorium opened for everyone of us - over 400 people - and a few minutes later Brian entered the stage (under euphoric applause, of course!)... Brian told us he was happy to be here but also a bit nervous, that on this evening he will talk more about life than about music cos music is his big passion but life comes first... The main theme of his following speech seemed to be a phrase, which he had put on his wall in the early years, THE ANSWER IS THERE IS NO ANSWER.

After his speech the question & answer session, he was asked which of his songs he would be most proud of, he said We will rock you cos WWRY makes many people happy (sport teams/events, the WWRY Musical, many cover versions and remixes...). About the song Another World, he said that a friend asked him for writing a song for a movie ('Sliding Doors') and Brian wrote AW, but when the movie was in cinemas, they didn't use AW, Brian was a bit confused and felt a bit angry about that, Brian said (laughing): "The movie was good but with my song it would be better." So, the song was used on Brian's own solo album. Someone asked Brian about tour plans, Brian said, that there are no tour plans at the moment, as he and Roger are too busy with the WWRY Musical, and if there would be a tour, then one with Roger, cos Roger has a great voice and Brian doesn't like singing live very much and he had after his last solo tour endless colds and such things, and he also said that he loves Roger like a brother and Roger loves him like a brother but there's also a lot of hatered between them.

There was a question about You Don't Fool Me asked, Brian told us that Freddie and John did do most on this song and he and Roger worked on this song after Freddie's death and that the songs he loves best on the album Made In Heaven are Made In Heaven and Mother Love (the last recorded song with Freddie)...

At about the half of this question & answer session Brian started to play a few chords on his Red Special and explained them and talked about how he and his father made the Red Special and how the Red Special was restored and what was restored... He also played a part of Brighton Rock, played and even sang Lonnie Donegans song "Puttin' On The Style" and of course he played WWRY (Brian wanted the audience to stamp their feet to it and we loved to do that). The whole show lasted over 2 hours and not the expected 45 minutes. Most of the audience left (very happy of course) the Uni after the show but we and some more Brian Mayniacs waited for Brian and in fact about 45 minutes later Brian came and we could get autographs and even could take some photos with him, he could have said something like "F*** off, buy my albums and leave me alone" or so but he didn't, Brian was very kind, during this "Autograph/Photo session" Brian's mobile phone rang twice (he's very busy ;-))... Brian then went to his car, as we had the same way to go we followed a few meters behind him. When Brian wanted to get into his car, we said "Austria loves you and Germany loves you too" (cos we were the only persons at this show who weren't from the UK), Brian laughed and said, that he will be soon in Cologne at the German Premiere of WWRY and even said good bye in German "Auf Wiedersehen" and waved his hand till we couldn't see him anymore...

...A GREAT Evening with Brian May - A GREAT man with a GREAT personality...