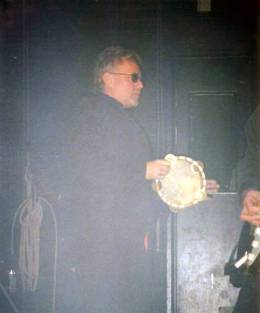 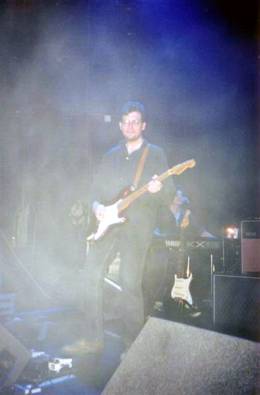 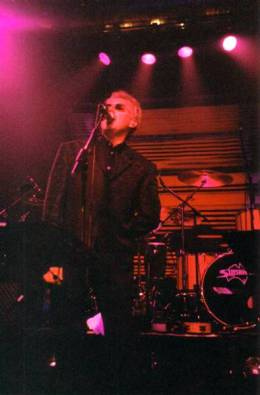 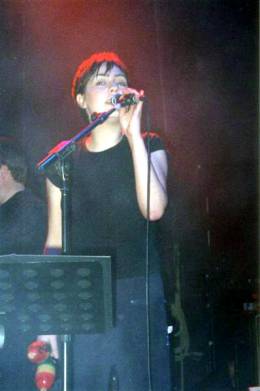 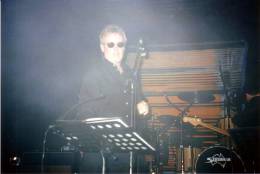 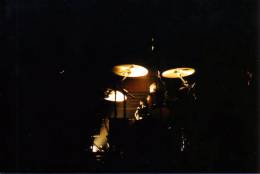 A Quirk Of Fate (the band I'm lead vocalist in!) arrived at the Waterfront for their first band outing at about five thirty, expecting to find a large queue. As it was, there were only three other people there, aside from Jason Falloon, Matt Exelby, Mike Crossley and Alden Evans who were happily wandering around outside. No sign of RMT though. At about six we decided to walk to a shop to buy a drink, which proved harder than we first imagined, as there's only one thing you can buy in King Street (the street where the Waterfront is), and anyone whose been to Norwich will know what I'm referring to! We arrived back about twenty minutes later to find Richard, who had accompanied Daniel Reynolds and myself to see Brian in London, sitting on the bench outside, which was quite a surprise as he was supposed to be in France! So our group of five became six. At about half past six we began to form something that remotely resembled a queue outside the door. The twelve of us that were there to start with were soon joined by many others, and eventually the queue stretched quite a distance. At seven thirty the doors finally opened, and we rushed in, grabbing a T-shirt and program on the way! We didn't quite get central, but on the front row nonetheless. Another hour later Treana Morris and her back up guitarist Alden Evans took the stage. Treana proved herself to have a brilliant (and quite sexy!) voice and also to be quite a good guitarist. After one song they were joined by Roger's rhythm guitarist Matt Exelby, who played keyboards and sang backing vocals. The highlights of Treana's set were her own song 'Naked On You' and a brilliant rendition of Brian's 'Sleeping On The Sidewalk'. She left the stage to a round of applause and announced that Roger would be on stage in about 10 minutes.

Roger went down 'Mental Block Avenue' again offering "We're going to do a quiet one now. There won't be many of them!" He then turned round to see Jason's bemused face, before realising. "Oh, no it isn't, rewind that. This is 'No More Fun' " An altogether tighter rendition of my favourite song from 'Electric Fire' than the one that had appeared on TFI Friday on October 9th followed, and I received yet another look from Matt. It MUST have been my singing!

"This IS a quiet one!" Roger assured us before 'Tonight', during which Roger looked bemusedly at the lighting desk when BLUE lights accompanied the line "Tonight, we're gonna paint this town red" I don't know whether it was supposed to be red or not, but from the look on Roger's face I would assume so!

Some synthesised trickery preceded 'A Kind Of Magic', and after a typically BIG ending Roger asked, "What's the date?" When we responded the 29th, he said "Ok, the single's out today, (well I hadn't managed to find a copy in any of the music shops in Norwich!) and here to help us sing it, the lovely Miss Treana Morris!" Surrender! followed (note my insistence on the correct new title!), and then Treana remained to add back ups on 'These Are The Days Of Our Lives' ("Lets go back a little bit!"). Roger then returned to the drums and He and Keith provided us with a brilliant drum instrumental, during which Matt graciously crouched down so we could all see Roger, and then it was off into 'Under Pressure', Treana singing Freddie's lines, and Roger Bowie's, a la Bowie/Lennox at the tribute gig.

Yet more waiting followed, before the band returned again with a brilliant rendition of 'Happiness' and then 'Radio Ga Ga', which this time did feature hand clapping from people other than me. Treana and Alden returned to the stage for the conclusion of the song, and at the end Roger jumped and touched the ceiling of the stage (the stage ceiling is low because there are other rooms upstairs where they hold (Shudder) raves and (moan in despair!) Drum 'n' Bass shows!). After Ga Ga, the band linked arms and bowed twice, before Roger wished us a good night and left the stage again. The raising of the bar lights signalled that there really would be 'No More Fun', and people began to make their way towards the exit. Daniel and myself, however, headed the other way, towards the stage door! As the winners of the Ginger Online "Meet Roger" competition, the fun for us was only just beginning! We spoke to the security guard (who I'm SURE I recognised, but I can't think where from!) who told us to wait there. And wait we did. About twenty minutes later, disaster struck when the announcement was made telling us Roger was seeing no one else that night! However, being the moody bastard that I can be (I'm a singer after all!), I refused to take no for an answer, and forced the security guard to totally break all the rules by opening the stage door without permission (thus setting off the alarm!) allowing me to speak to Dean 'Deano' Crathern, the assistant-to-the-tour-manager, as the program called him, or 'dogsbody' as everyone else called him!

Deano the graciously handed me over to Martin Groves, the tour manager, or M.P. Groves as the programme regally called him! Martin shook my hand and invited Daniel and myself backstage, and told us to wait by the door. Then we saw what being on tour is REALLY about! Steve Barnacle was wandering aimlessly up and down the corridors, beer in hand, and Matt and Jason were going in and out of the dressing room. Mike tried to return to the stage, but Martin shouted "Mike, where the f**k are you going?" like an aggrieved schoolteacher! God, the power! Whilst waiting there we chatted to a charming young lady, (if you're reading this, hi, and thanks for showing there can be some normality amongst chaos!) who had the unenviable job of trying to tell the fans who were lingering outside there was no chance of getting in! "They probably all hate me now!" she moaned, before directing "Sorry!" towards the door! She then slumped forward, hands on knees, obviously knackered! "How the hell did you end up working with Musos?" I asked her, knowing how bloody awkward we can be! "I guess it just happened!" she replied. On that note we left her, as Martin took us in to meet Roger! He shook our hands and asked us to take a seat. We talked for a few minutes, and I asked Roger if it was true that he had lived in Beulah Street in King's Lynn as a child, as the Eastern Daily Press had reported. "Yeah, number eighteen." He replied. "Well," I said, "if you come out of Beulah Street and turn left, the next road is Marsh Lane" Roger thought about it for a second. "Yeah, I know Marsh Lane!" "Well, My auntie lives in Marsh Lane!" I informed him. "Good God!" he exclaimed "Is the shop still there?" "Yeah," I replied, "But it's a Mace now!" Roger took this in before saying, "I used to go fruit picking on Marsh Lane!" "You still can!" I told him "I've been fruit picking there too!" We both reminisced about youth summers spent fruit picking on Marsh Lane, although his youth summers were over forty years since, and mine only about six or seven! Roger then signed our programmes and 'Electric Fire' lyric booklets, signing them "Roger Taylor-Queen" as if he now needs to remind us who he is! We thanked him and then left, shaking Roger's hand again. "I won't get up!" he apologised "I'm knackered!" "I understand Rog!" I told him "I'm a singer too!" Roger smiled (perhaps he'd been talking to Matt!) before pushing his glasses down onto the end of his nose, proving he's still got eyes! We left very contented, satisfied by both the gig and our meeting with Roger! All I can say Roger, is thanks for a great night!