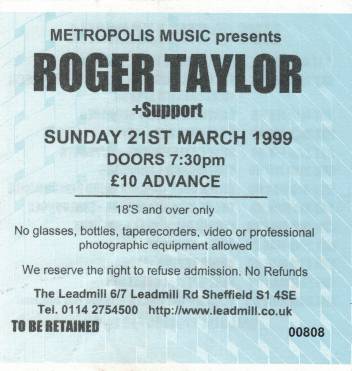 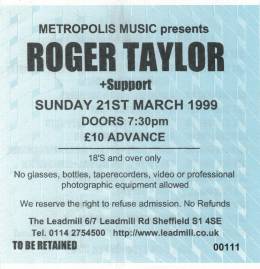 Written by Cathy aka Highfire

Arrived at the Leadmill at 12.30pm, only one other person there. Started queuing. Weather cold and showery, but it didn't dampen our spirits. Two more people came to join the person who was standing with us, and old acquaintances from October 1998's Shepherds Bush Gig were renewed. The band came early, or so it seemed, and then went again. Treana arrived, smiled sweetly and greeted us, and then disappeared inside. Roger came for the soundcheck at about 4.30pm, but the sneaky devil went in a small door around the back. A handful of fans were there to see him. Me? Well, if I'd been literally 5 seconds quicker running round that corner, I'd have managed to meet him. Better luck at Wolverhampton! A few hours, a few sing-songs and a few rain showers later, and the queue was very slowly getting a little longer. Come 7.00pm, it was of a moderate size and we all stood and formed an 'orderly' queue, ready to make our way in. In we run, straight to the front, and root ourselves to the spot at centre stage. Treana was truly amazing. Her voice seems to have really improved since Shepherd's Bush, she is far more confident and relaxed, and I think she was genuinely warmed by our reaction to her. Then she was gone, the lights went down, and an air of anticipation was abound in the theatre. The pounding drum intro to Rock You signified the start of a spectacular hour and half's entertainment. Roger looked stunning, as usual, in black, as usual! A word-perfect set, all apart from the "And I wish I wasn't here" line from Strange Frontier. We helped him with that one, at which point he smiled his appreciation. The band themselves were on top form, as was Mr Taylor, wowing us with his mere presence.

For me, the highlight was Under Pressure, with Treana hitting those high notes superbly. What a force to be reckoned with in the future!

Two encores, ending with a house-rocking Radio Ga Ga, and then all was over.

I was lucky enough to grab one of the set lists off the stage, and clutched it close to me as I made my way out and back to my car. What passers-by thought of me I've no idea, as I was walking through the dark streets of Sheffield, arms full of t-shirts and programmes, with a silly grin on my face!

Thanks to Roger and everyone involved, for a night to remember. It brought memories of Shepherds Bush rushing back (not that they've gone away too far, yet!), and has really set me up for Wolverhampton next week.