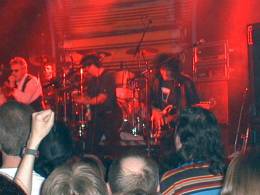 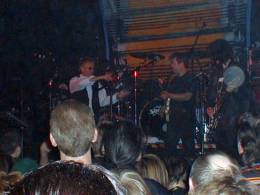 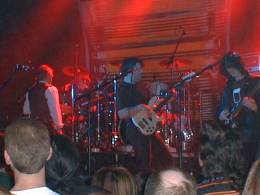 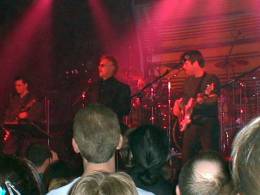 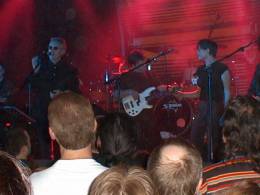 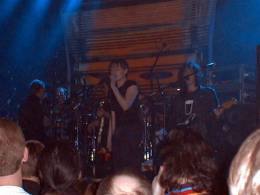 It was the second time in just four and half months that I found myself with a smile on my face, making the journey down from Lancaster to Manchester to see a former Queenie in action... if only Brian and Roger could always tour this frequently!

After the obligatory purchase of a tour shirt on the way in, I headed upstairs to the University Debating Hall and settled for a centre-stage position on the fifth row - just a couple of feet from my place upon Roger's visit of December 1994. After plenty of conversation and storytelling from Rog's previous dates which helped pass the intervening hour or so, at 8.30 the house lights went down and Treana took the stage. I've got to say that I wasn't at all sure what I was expecting from her as it's difficult to gauge an opinion from those contributions she made to "Electric Fire".

I must say at this point that I felt sorry for her accompanying guitarist, Alden Evans, who had to sit like a complete lemon through the first track "I'll Sing For You" which Treana performed solo. Surely he could have been brought out afterwards, not unlike Matt Exelby (Roger's rhythm guitarist) who played keyboards on, and added backing vocals to, some of Treana's other songs? That moan aside, it was a gentle little number which nicely shifted the crowd from their pre-gig chatter to "paying attention" mode. (Incidentally, scrutiny of the sleeve notes show that Matt also features on one of the tracks on Treana's album, playing his more customary guitar).

All in all, Treana's set was, in my opinion, rather impressive and certainly pleasing on the ears. "Naked On You" is certainly catchy and despite this being only the fifth night of the tour, quite a few people in the front few rows certainly already knew all the words. I think it was around about the end of this song that I decided that a copy of her album would be finding its way into my pocket before I left the venue.

"Warning", "You Call Me Up" (a track not featured on her album) and "I Know Better" followed, leading up to the climax of her set. Now, "Sleeping On The Sidewalk" has always been an interesting piece of Queen history, being as it was recorded in a single take when the band weren't aware the tapes were still rolling. The fact that Treana had decided to play this old Queen chestnut to a predominantly Queen (no disrespect to Rog as a solo artist, but we know where our heritage lies!) audience just ahead of a former Queen artist taking the stage was a big risk. But she certainly does the song written by the curly haired cloggy one justice, using a rather different arrangement which features some really lovely blues licks, particularly in the opening bars.

Just twenty five minutes and six songs later (definitely not enough, IMO) and it was time for Treana and her cohorts to bid their farewells to plenty of applause, cheering and smiles from the crowd. Ten or so minutes of work from the roadies - I'm surprised it even took them that long to shift four acoustic guitars and a couple of stools! - and the stage was ready for RMT.

Following a series of taped introductory noises reminiscent of "Interlude In Constantinople" from "Fun In Space", the band took to the stage. Roger immediately headed in the direction of the second drum kit, sporting his Henry Ford look (i.e. any colour so long as it's black), a somewhat trimmed beard and his usual cheeky grin. After blasting out the opening salvo of "We Will Rock You" and waking up the hearing of those who had only just wandered in from the bar, Rog wandered down towards the front of the stage, cast a quick glance along the front couple of rows and, before launching into his first vocal, pulled his tongue out. Now, whereas Brian seems to take his shows very seriously, Rog is very visibly just out to have fun - that's no complaint about either of them, just an observation that they are obviously quite happy to go out and do their own thing, and quite right too!

Roger co-drummed the opening to "Pressure On", which was succeeded by "A Nation Of Haircuts" ('that one is a bit energetic for someone of my age'), "Believe In Yourself", ('here's an old one') "I Want To Break Free", "No More Fun" ("lot's of fun really!!!"), and "Tonight". As with it's previous outings at Cross gigs, "A Kind Of Magic" was preceeded by some electronic wizardry but then warmed up into the song proper. It was then time for the forthcoming single, "Surrender", which saw Treana making one of several return trips to the stage. Having received my promo of the single on the morning of the gig, leading to an inevitable "play it to death" mentality before heading to Manchester, I've got to say I wasn't overly grabbed by the live version. But, admittedly, I'd probably already had more than my fill of that song for one day.

Back to the Queen catalogue and "These Are The Days of Our Lives" came along, as moving as ever. Although Roger obviously doesn't perform it anything like Freddie, you just feel there is something significant about his own version that you can't quite put your finger on, given it was one of the last pieces he wrote for Freddie to sing. Back to the drum kit for Roger and after a nice piece a quick nod to Steve Barnacle yields the bassline to "Under Pressure". An interesting choice, and one which I believe Roger and Treana perform far better than David Bowie and Annie Lennox did at the Tribute Concert. "London Town, C'mon Down" brings the main set to a thundering and all-too-soon climax.

Before retaking the stage for the first encore, RMT swaps his black shirt and jacket for a white shirt and waistcoat - if I was being facetious, I might suggest that he was trying to emulate BHM's trademark late 80's look *;-)

Stunning versions of "I'm In Love With My Car" and "Tenement Funster" give proof positive that good live songs are good live songs irrespective of their age - or indeed that of their performer! It's certainly hard to believe that Roger is now basically double the age he was when he wrote those tracks.

"Strange Frontier" dutifully followed but was somewhat marred by some very audible crackling over the intro. The song was well-received, but I personally think that "Man On Fire" works better. That said, it's nice not to have too many of the same tracks from tour to tour.

The band vacated the stage for a second time and, it has to be said, that the calls for another encore were less than rapturous. But, thankfully, the band dutifully returned as per the set-list to finish off with "Happiness" and "Radio Ga Ga", complete with the traditional sea of arms.

Electric Fire is, I believe, a whole different affair live than on a piece of plastic - far more energy, far less production and far more enjoyable. It was certainly nice to see Mr. Taylor behind a full kit for parts of four or five songs - of course, more would have been nice! - and the lad can certainly still drum like the best of 'em. The band were tight all night and everyone appeared to leave the place with the feeling that they had got more than their moneys worth.

Hello to all those I knew at the gig,namely Simon D. (what a way to celebrate a birthday, eh!?), Andy, James, Simon H., Sarah, Kev, Glenys, Paul and Jamie.

Oh, and of course, a quick mention to the Tunney's who I *will* meet in person and not just post-gig cyberspace one of these days!

BTW: Am I the only one who thinks that Matt Exelby is trying to look like Jarvis Cocker, while Jason Falloon lookes increasingly akin to The Edge from U2?