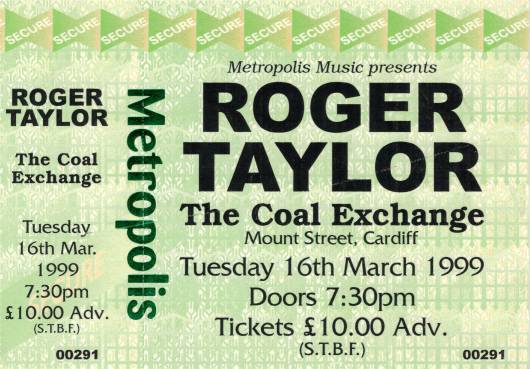 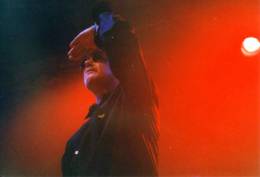 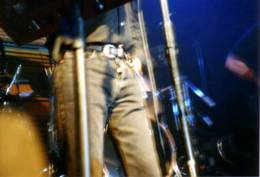 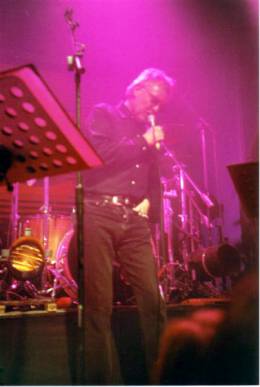 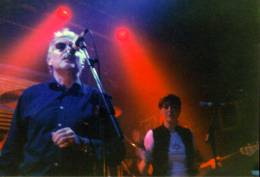 We left Swansea by car on the 16th March 1999, to see Roger Taylor live at the Cardiff Coal Exchange. We arrived early, queued, the doors were opened, and we trooped in, not believing the smallness of the venue, and that we would be so close to Roger. We took up position in front of the left hand side of the stage (as you look at it), and waited for the Electric Fire gig to begin. I knew the material back to front, and as a guitarist, couldn't wait for Jason Falloon's guitar to kick in. Friend Scotty said it would be a heavier and louder gig than we thought it might, and I agreed.

There was a flickering of orange light from around the balconies, and a buzzing sound as the mini electric fires sputtered into action. Roger Taylor appeared. We all enjoyed the first couple of numbers, waving at Roger like fools. But I wasn't happy: something wasn't right. Where was the guitar? Aaaarrrggghhh!!! Jason Falloon was right in front of me, playing away, but the guitar sound was nowhere near as loud as it should have been. I was convinced that Jason wasn't aware of this. So as he surveyed the crowd from left to right, I caught his eye and gestured, both hands to my ears, shaking my head. He looked straight at me, with a slightly perturbed look on his face, and checked his guitar. He kept on playing, and only later on in the gig did a tech. come on stage and adjust something which improved the sound.

We thoroughly enjoyed the gig though. Other highlights were Treana Morris doing a superb rendition of Sleeping on the Sidewalk. Some nutcase managed to climb onto stage next to Roger, and jump up and down for a few seconds. Roger's face was a picture of cool and bemusement. But we were a bit scared (only briefly mind). We also had a good laugh when Roger forgot the words to Happiness, after the intro. The band stopped. Slightly embarassed, Roger apologised, and told us how important it is to remember the first line of each song! It was a great gig, but I was disappointed with the guitar sound.

But the story does have a happy ending. I made a last minute decision to go and see Roger in Wolverhampton on the 30th March. The sound was much better, Treana looked straight at me while singing a ballad, and smiled, (I'll never forget it). Oh yeah and BRIAN MAY turned up. Hooray!!

"Naked On You", "I Know Better" and a few other songs from her new album followed, and she finished off her support with a dreary but well-received "Sleeping On The Sidewalk".

After another ten minutes, during which I was oh-so-nearly eviscerated by a bouncer for sneaking a look at Matt Exelby's set list, RMT himself finally took to the stage. You wouldn't think that around 300 people could make so much noise, but the ceiling on the arena was close to being lifted off by the cheering.

After the first couple of songs Roger introduced himself (as if *that* was necessary!), and said: "Well, it's great to be here in Wales, um Cardiff... It was our first night last night, and it was OK... but this one's gonna be even better!"

Highlights for the blooper-spotters were Roger's toss-the-tambourine-in-the-air-and-drop-it, much to everyone's amusement, and his attempt to start singing "Happiness?" half way through the song, realising and giving everyone another good giggle.

Autographs after the event were limited but a few lucky buggers got what they wanted, whilst I attempted to be smart and around the van to jump the queue and whacked my leg on the toe-hook on the back of the van - such is life... the fact that I got one of Roger's drumsticks when it was thrown into the audience made up for it, though :o)