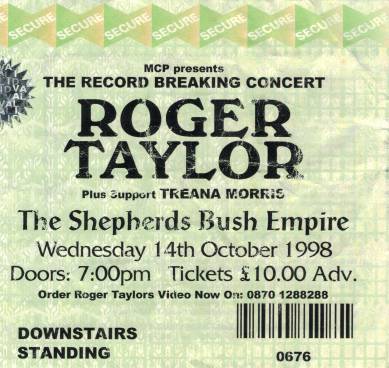 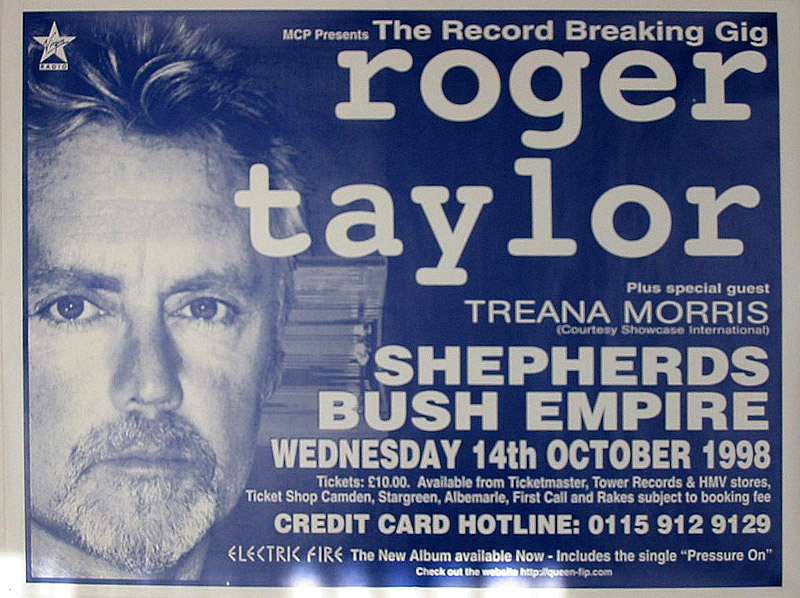 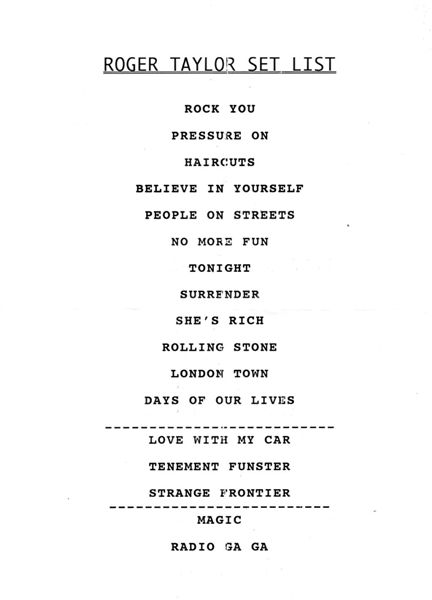 8.30pm. Treana Morris comes onstage. A pleasant enough acoustic set which included Sleeping On The Sidewalk (a nice surprise - wonder if Brian knew about this...) and Ticket To Ride, but frankly, the crowd were here to see Roger Taylor, although Morris was given a pretty good reception. After a shortish set (around 20-25 mins) she left the stage, and back came the taped music. At 9.15, during the song Now That The Magic Has Gone, the roadies start to tune the guitars up - this MUST be the moment, no? No. False alarm.

9.18pm. The lights dim and the air is filled with the unmistakeable intro to We Will Rock You. But hang on a minute - that's not Roger playing...that's Keith Prior, and there's a second empty drumkit onstage... The beat gets stronger and the audience hand clapping is ecstatic. Suddenly Rog appears at the other kit and joins the beat. The crowd go wild. It has begun.

After a lengthy intro, Rog came downstage and began the first verse. WHAT a welcome! After a 6 minute screaming version of WWRY - at the end of which Rog rejoined his kit for a killer of a finale - he came back and introduced the next number - Pressure On, which was INCREDIBLY heavy and had an amazingly full sound to it. The downstairs of the venue was already rocking, but the balconies were a tad more reserved.

Next was Nation Of Haircuts, and a point worth mentioning was the line "You're so fucking cool", which the audience screamed at Rog, easily drowning the band out. Then followed Believe in Yourself, People On Streets, (No, he *didn't* perform all of the odd list, foiling our desperate attempts to fill in that missing word..) and the much-awaited No More Fun - a track performed with such energy that it seemed as though it couldn't get any higher.

Then the mood changed. "If we are capable of such a thing - this is a delicate love song" - was how Rog introduced Tonight. Falloon repeated his stunning Spanish guitar on this track live, and was, for me, one of the highlights of the show.

Next came the first surprise. Roger introduced Treana Morris and Jonathan Perkins, who performed the vocals of Surrender, with Taylor restricting himself to the drums, without singing. After an uneasy start, this song erupted into the wall of sound it threatens to, but doesn't quite make, on the album.

Perkins is a fine vocalist, hitting those high notes with the best of them, and the coupling of Perkins and Morris really displayed what an angry, aggressive song this is. Then it was time for, presumably, one of Perkins' own songs, She's Rich, "dedicated to my soon to be future ex-wife" Although a great track, the audience were getting restless for Roger...

Then back he trotted for a brief announcement - "This is the guest part of the evening, so please welcome Uncle Bob Geldof" And yes, it was true. Sir Bob appeared and performed Bob Dylan's Like A Rolling Stone to tumultuous applause. What a moment.

London Town, C'mon Down brought Roger back into the spotlight, and it has to be said, it THUNDERED - by now the balcony were on their feet too. Then it was "Queen Time" After a beautiful version of These Are The Days Of Our Lives, with Rog on marracas, he launched into I'm In Love With My Car ("Sing it!!" - and they did..) and then Tenement Funster and once again, we really *were* back in the old days. It was then the turn of Strange Frontier, and, apart from the guitars losing their way halfway though, it was soon back on course, and rapturously received. Then, all too soon, Roger blew a kiss and was gone...

...but not for long. A Kind Of Magic came next (guitar solo a bit of a let-down, but hey, this ain't Brian playing), and then, finally, an extended Radio Ga Ga. You had to have heard the volume of the handclapping to believe this - a fine end to a fine evening. A 90 minute set that ended far too quickly, but there you have it.

Doing what he does best to a capacity crowd (approx 2000) must have made Roger pretty chuffed that he decided on doing this show. Will he tour? Who knows...but he can surely be in no doubt that there's an audience out there, gagging for the brand of raw, powerful, performance rock that Roger Taylor excels at.

There is one ray of hope - there were flyers being given out which said "If you...would like to receive further upfront information on Roger Taylor releases, live plans and exclusive offers then simply fill in the..form.." What CAN this mean? Of course, the card is merely a database building exercise from EMI, but I wonder just what plans are afoot...