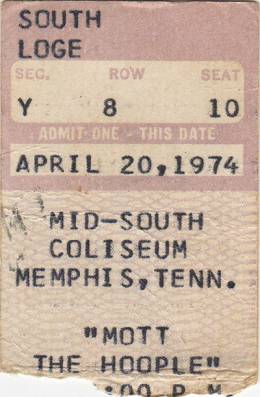 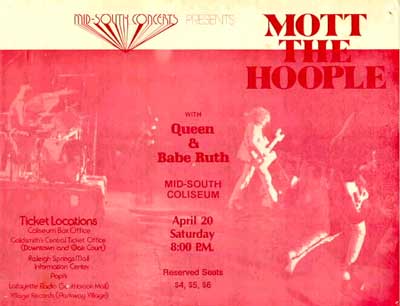 Queen was the supporting band at the Mid-South Coliseum in Memphis on 4/20/1974. Mott the Hoople was headliner.

I was there-- 17 years old, aisle seat/3rd row on the floor. Show was spectacular-- Freddie impossible to take your eyes off of. I thought "Keep Yourself Alive" was one of the best songs ever-- still do.

However, I was there primarily to see Mott. I was good back in the day at finding out the hotel where bands were staying. Met a number of rock stars that way including Bowie (multiple times), Lou Reed, Todd Rundgren, Peter Gabriel, etc.

I was at the right hotel but having trouble finding the right suite, walking around and around. Every time I passed one particular room, with the sliding doors open but the lights inside off, a guy tried to beckon me inside. I was never THAT kind of fan. So I kept shrugging him off and going around and around again. Still not sure if he thought I was male or female-- I was a very androgynous boy. Not that it mattered to him, maybe...

Finally I was frustrated and fed up-- he called to me again, "Come on, dear, come inside with me." I stuck my head in the room, saw that it was Freddie Mercury, and blurted "You're not Mott the Hoople!" That shut him up! Will never forget that and will always cringe thinking about it. Indeed, Queen was not Mott the Hoople. Never that night could I have imagined the iconic stature Queen and Freddie would reach, or the meteoric demise of Mott.

I've been a lifelong Queen/Freddie fan-- saw them several more times in concert but my days of stalking hotels were over. I never saw Freddie face to face again. Again, great site-- appreciate your solidifying Queen's dates and places in history, all in one location, as they should be.