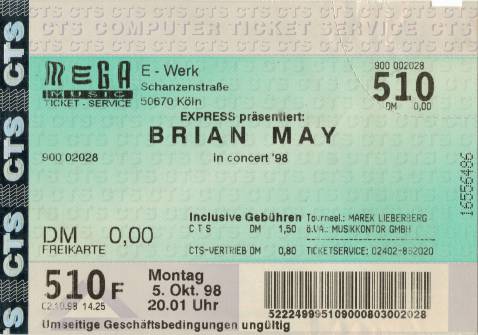 Wow, what a lot of pushing and fighting. A larger crowd then ever before, some people making troubles and by far the hottest concert of all. The mood was great again, just some not too tall people had problems with the stage. I have to explain that the usual set-up is a main stage with a ramp extending into the audience in the middle of it. Now in some concerts this ramp is lower than the main stage and secured by fences. In Cologne the entire stage and extension was 150 cm high - while your humble reporter is exactly 149 cm tall.... Well, the support band was very heavy and not very welcomed. Then - as in every show - it was announced (in a perfect German with only a very slight accent) that Mr. May is on his way to the concert hall, but a little late and that in the meantime the great Mr. T.E. Conway was here to entertain the audience. Quite a few people in the audience reacted like, 'What the hell is that again?' And the guy next to me asked me if I knew that guy. I told him just to watch, and pretty soon the guessing started, 'Is it Brian? Or isn't it?' I guess the voice gave him away.

But still there was a little confusion again as while Twitty is still on stage Brian appears behind that sabena tree curtain.... It's great fun each time again. In addition to the concert hall being the most crowded up to now and by far the hottest of all, the fan set up to cool Brian did not work. He found his own way to make that obvious to the technicians: Whilst playing on the guitar he gave it a kick with the foot to make it fall on the side. Few seconds later that problem was sorted out again. Neil Murray gave an incredible bass solo which seems to me to become better at every show (what will it be like in England?). A small group of people (guess who? Yes, it were the May-keteers again) shouted for Cyborg, but in vain. All we got was a slightly amused, half annoyed glance from Brian. Well, bad luck, we will try another song next time (watch out, Mr. May, we'll be there for quite a while!).

Despite the great mood and a very loud crowd this time the audience had to do with the first set of encores. Everybody was exhausted, mostly because of the heat and that might be the reason that the band refused to play more encores. As always Eric Singer gave away his drumsticks (when will I get one, Mr. Singer?) at the end of the show. And talking about him: His drum solo alone would be worth the price of the ticket. Not only for his most amazing drumming skills (you should go there to hear the way he uses his two bass drums), but in addition he provides the audience with a most amazing fire show which reminds on his time with Kiss. As poor Erin longed for a chance to get a photo signed by Brian, we went to his hotel to wait there for him. Bad luck, that Depeche Mode gave a concert in Cologne the very same evening and stayed in exactly the same hotel. That made security pretty tough and there was simply no chance to get even near the entrance. If you read this, Mr. May, have mercy with a 21 years old girl who made All The Way From South Carolina just to see YOU in five concerts!