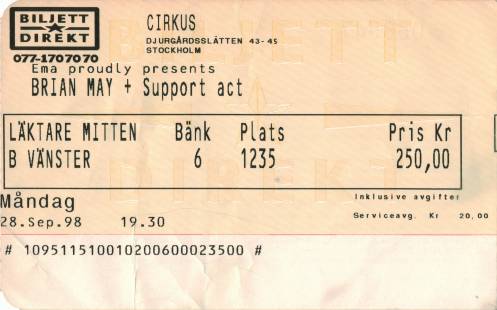 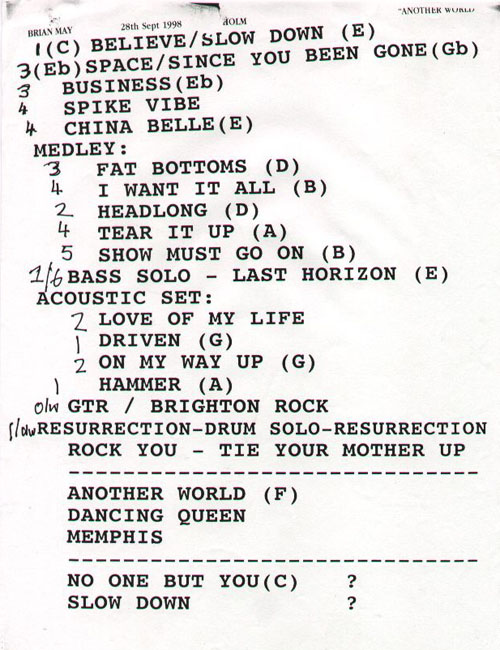 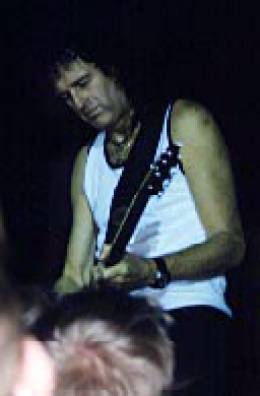 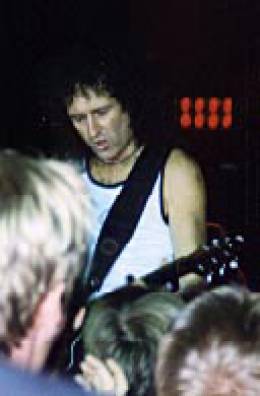 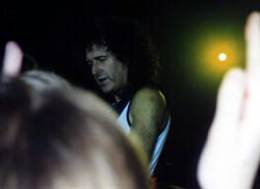 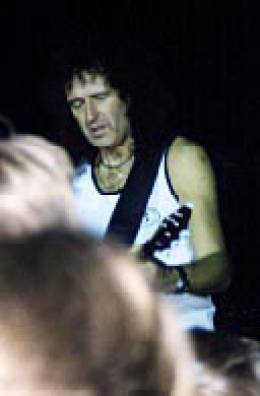 Then we went to stand in line at the doors to the main hall, and through the doors we could hear the sound check, cool!!! During the soundcheck they kept playing bits of the Abba-song "Dancing Queen", first we thought it was a tape, but it sounded like the Red Special, so we decided that they was just playing around.

At about 07:30 they opened the doors so we got into a coridor running round the main hall, and with a coupple of doors leading in to the main hall. We ran to the one farest away (closest to the stage), and there we had to wait for some time more before they opened those doors. This time

We had to wait for about one hour, when they played the same tape as in Oslo, and then the curtain was lowered from above, the tape stoped and the drumming began. You know the rest!

OK, too tired to write more now, that will have to do.

We arrived pretty late, just in time for the show to start but as always these things are delayed so we had to wait in our seats for 30 min before the show started. The Cirkus arena is perfect for a gig like this, just big enough for this kind of crowd and specially made for concerts with a big cupol ceiling giving a very good sound.

The curtain rised and the light came on as the band moved into Since You've Been Gone, that really send a shiver through me, what a feeling!

After Brian had dedicated SYBG to Cozy he proceded with Business (with a dedication to Bill Clinton), now the Cirkus really rocked...

Spike Edney performed his synth solo after that. I felt that this could be left out, it did not really belong with all the other stuff. Chinese Torture leading into China Belle was great.

After this he asked the audience what we wanted to hear, imagine everybody screaming out just about everything Queen ever recorded.... He got the message and said that they going to do some old stuff (yeeeahh from the audience) and Fat Bottomed Girls started. I think this was the peak of the night, this song really rocked and the girls did a really good effect to the sound. They moved into I Want It All with that damn good solo in the end, then Headlong, Tear It Up and The Show Must Go On ended that Queen part. Now we felt like we really where in heaven....

Last Horizon was next, beautifully played by Brian as he was standing on a pier out from the scene into the crowd (he used that a lot to get closer to the crowd).

Then Brian asked if we wanted to sing (what a question...) he was handed a acoustic guitar and started to play Love Of My Life, the crowd sang along the whole song but Brian never stoped singing and let the crowd take over, that was a little dissapointment....

The rest of the band joined and chairs was brought up for everyone on stage, the acoustic/ballad part started.

First with Driven By You, an acoustic version I never heard before, really different and quite nice, then On My Way Up still acoustic, after that Hammer To Fall as a ballad (not acoustic) really different from the original that he then moved into.

Again he was left alone on the stage, connected all the effect boxes and played the solo from Brighton Rock, this has always been a top treat live... how does he do it?

Ressurection was next and the arena really rocked again, Eric ended it with his drum solo which was very good, in my oppinion better than Cozys (I probably get flamed for that, but I really think so). The band left the stage and we were all clapping and screaming to get them in again.... well as always, you know.

After the song he said - We are in Sweden, right? - (the crowd went riiight!) - We are in Stockholm, right? - (yeeaaah!) and the band started to play Dancing Queen, the old Abba song!

The girls came onto the scen in their Abba costumes (they both perform in the Abba cover band Fabba and before Bjorn Again) and took over the show singin and dancing, Brian just stepped back a bit and played his guitar with a big smile on his face, it was clear the he really enjoyed this....

It was really funny to see all these hard rock / heavy metal rockers playing a song like this, it was totally unexpected and the crowed just went nuts!

After that they continued with We Will Rock You with the traditional clapping and Tie Your Mother Down before finishing the show with All The Way From Memphis.

The band thank the audience for the support and we all cheered and screamed, and it was all over. Brian ended with saying that I had been too long since last time in Sweden but that he would soon be back again, I hope he means it.