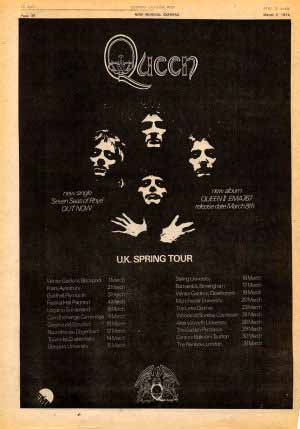 I saw Queen at Cromer Links in 1974 and it is a night that I will never forget. It changed my life. The band were brilliant and they put on a concert that was really special. I remember several things really clearly.

The introduction-Procession from Queen 2. The stage was in darkness and when the band exploded into life it was like nothing I had ever seen before. Even then they knew how to put on a show.

The costumes-two band members in black and two in white. Brian wore his famous caped costume made by the designer Zandra Rhodes. Freddie wore black nail varnish and his "shiny glove"-though before they came on stage he was wearing the furry jacket which he often wore in videos and on Top of the Tops. Roger Taylor was so pretty!

The music-I especially remember Ogre Battle and Father to Son from Queen 2. The Links was only a small venue but the whole place was rocking.

We had no idea they would become so big but in retrospect all the signs were there-their musicianship, great songs, Freddie's stage presence, the light show. I next went on to see them at Earls Court in London on their Jubilee Tour in 1977 and couldn't believe they were the same band I had seen at our small local dance hall in a small seaside town in rural Norfolk.This gig has passed into legend and I feel privileged to have been there. Freddie still lives in our hearts.

I was the young man to whom Freddie Mercury spoke and said, 'Shut up, you drunk' when I led the singing of 'I do like to be beside the seaside' after they had played 'Seven Seas of Rhye'!

I was manager when Queen were booked. I didn't think they'd turn up because 'Seven Seas of Rhye' was just coming into the charts and being played on the radio.

Freddie came out with this black nail varnish on, Brian May did a big guitar solo, and Roger did a drum solo. There was a big gong behind the drums. I had an idea they were going to be something special.

Freddie Mercury was dressed all in black. Brian May came on stage wearing a white outfit with a small cape on the back. They were absolutely brilliant, blew the place to pieces, they were really polished. They encored with 'Jailhouse Rock' and 'Big Spender' that night. I spoke to the band after the gig. Brian sat on stage and chatted. I asked him if I could have a go on his Red Special guitar but he said: 'No, I think the roadies have just packed it away,' which was a real drag.

In those days, if you hung around long enough afterwards, the band would either reappear on stage in their normal clothes or you would catch them outside. Occasionally you could be standing in the toilets next to a rock star! Queen were very nice people. I brought my albums along and they signed them for me, Queen I and Queen II.