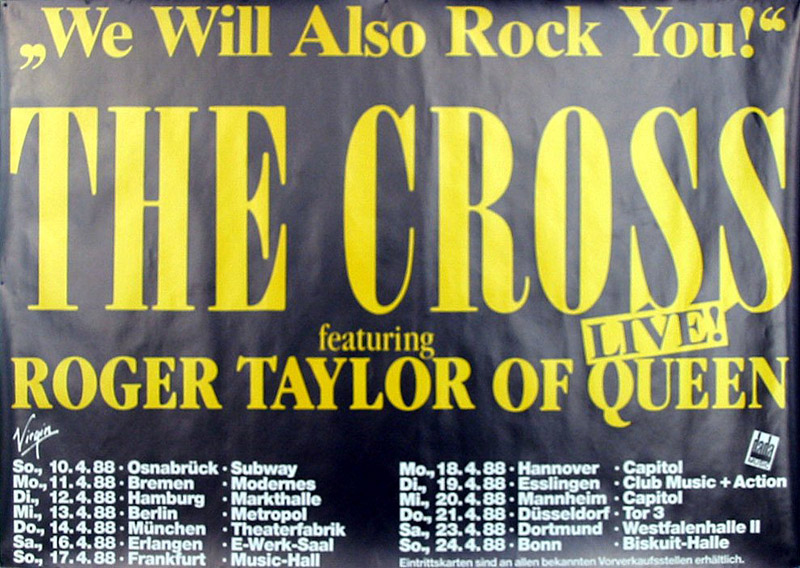 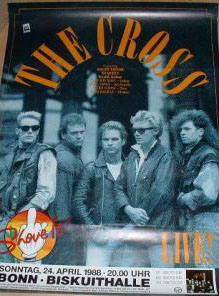 I saw them live 2 times. I bought my first Queen-Album in Sept. '86, so the "Shove It" tour was my first possibility to see at least one member of Queen live. At the time of course I didnt know that there would never be a chance for me to see Queen...

So I went to Bonn in '88 where The Cross played in the "Biskuithalle". I clearly remember waiting in the car park right outside the venue. A friend of mine (who actually gave me my first Queen tape) and myself - a kid of 12 years - were fascinated by those people in Queen T-shirts, their car hifis turned up to maximum volume, listening to Queen or Rog's earlier solo albums. We were relatively new Queen fans, (even though we both managed to get all the albums and Rog's solo stuff within a few weeks from our pocketmoney). But that was the first time we saw other Queen-Fans and it felt great. Support act was Dutch metal group High'n'dry, I think... quite forgettable.

Only about 50-70 people were there (in a venue for about 600-700, I guess) and I remember being very disappointed, but still nervously waiting for Roger! In fact the venue was so empty that my father and my mother who drove us there could come in without a ticket and watch the show.... they actually enjoyed it, I think... My father even tried to get backstage to talk to Roger after the show! My friend and me were waiting outside to get an autograph and my father said "I'll just go in and get him out"! We shouted "no, the bodyguards will kick you out" but there he was, walking through the backstage door as if he was Jim Beach himself. The local security let him in without asking who he was, he just asked where to find Mr. Taylor... I guess he looked quite official, cause he wore a suit. Anyway, he strolled around and came out saying he didn't know which one Roger was and his English wasn't good enough to ask. We still laugh about that when we talk about it...

When they finally entered the stage, Roger tried to refrain from laughter when he saw the audience but ended up laughing out loud anyway and had to start singing three times. But despite the small audience they went on flat out!!! It was great to hear those familiar songs, especially the old Queen and Roger's tracks live for the first time. Great gig, they played a full set with encores and were basically jamming around and having fun - like a rehearsal in front of some guests. Clayton Moss throwed his guitar in the air during one song and seemed to have hurt himself when he tried to catch it, but could go on, so maybe it was just for the show. They seemed to really enjoy themselves, Rog was smiling the whole time! They returned to Bonn in 1990 and this time about 500 people were there - good rock show again, but I will never forget the funny intimacy of the first gig.